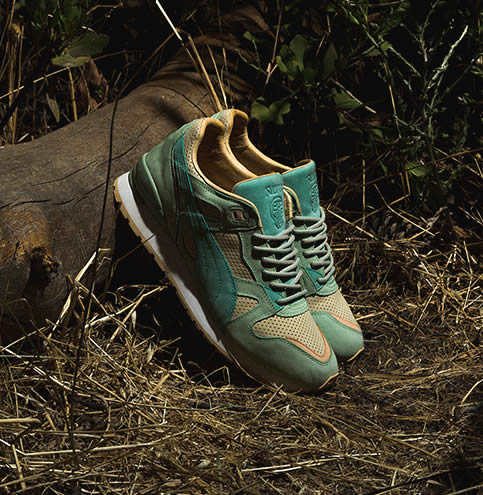 PUMA has collaborated with local designer Daniel Ting Chong to create two new sneaker iterations; a vintage Duplex OG and a modernized version of it, the Duplex Evo. The Cape Town based illustrator and designer has created two distinctly African sneakers, by drawing on traditional indigenous Zulu and Xhosa beliefs.

Chong’s design of the earthy hued Duplex OG (R2 899) was inspired by Unkulunkulu, the Supreme Creator in traditional Zulu culture. The perforated upper consists of a premium nubuck suede completed by a embossed artwork of Unkulunkulu on the tongue.

The heel cap embraces a custom typographic PUMA logo, which has been specifically created for this release. Notably, it is rare for PUMA to release a sneaker without their iconic typographic logo.Reference to Unkulunkulu continues in the design of the unique footbeds, with a chameleon on the left and a lizard on the right.

“Unkulunkulu sent a chameleon to earth to tell the human race that they will be immortal. But the chameleon became slow and lazy on his journey, so Unkulunkulu sent a lizard to earth to convey the message that there will be death,” says Chong.“It seemed natural to apply this mythology to the Duplex OG because this silhouette is the first of its kind, coinciding with the mythology of Unkulunkulu’s original creations.”

The second sneaker in the collection is the Duplex Evo(R1699), with the various hues of green on the sneaker referencing Mamlambo, the Goddess of Rivers in traditional Xhosa culture. Described as a giant snake-like creature, Mamlambo resides in the Mzintlava River.

The Duplex Evo has a lightweight, snake-like mesh upper along the toe box and tongue offset by a premium nubuck suede on the heelcap and edging of the toe box. The custom typographic PUMA logo appears on the heelcap and tongue. The tongue of the sneaker also carries a visual moniker of Mamlambo, while the footbed has custom symbols that serve as a visual spell to resist the urge of being lured into the river.

“Mamlambo is well suited to the Duplex Evo because just as Mamlambo alludes to a form that is a synthesis of various species, so the Duplex Evo is a hybrid created from different materials and technology”, explains Chong.

Look out for the  PUMA x Daniel Ting Chong Duplex OG and Duplex Evo releasing on Saturday, 10 December 2016 at:

Exclusive to the first hundred pairs purchased is a custom made pair of Daniel Ting Chong socks, two metal pin badges containing the symbols of Unkulunkulu & Mamlambo, a customized pencil and tote bag.