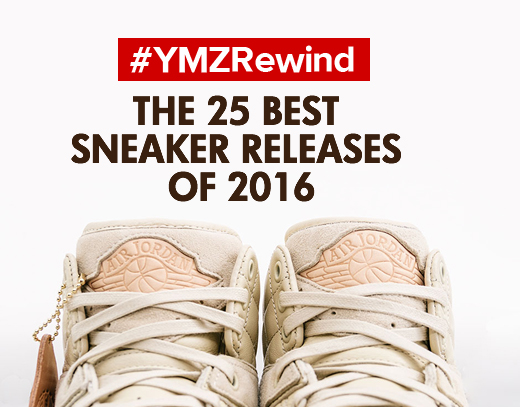 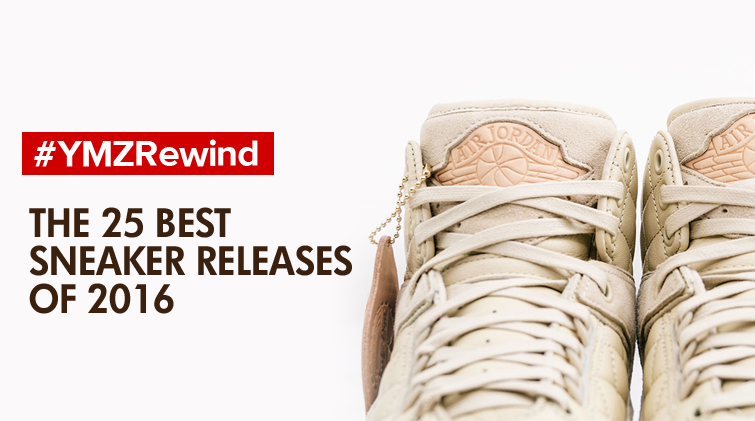 With only few days left before 2016 ends – we have decided to compile a list of  25 of the best sneakers that dropped locally this year. It’s no surprise that Nike and adidas dominated this year’s calendar  – we also saw the introduction of the new Yeezy Boost 350 V2 silhouette.

One of this year’s unforgettable collaborations with Don C, accompanied by a string of most anticipated retros that included Air Jordan 4 ’89 ‘White Cement’,  Bred 1s, True Blue 3s and Space Jams.

The Three Stripes brand made it big with NMD drops – remember the mayhem that the adidas NMD caused on its global launch day in March? That really paid off big for adidas, which sold more than 400,000 pairs of the sneaker on its launch day.

Moving right along…This year brought plenty of great shoe styles from PUMA brand but let’s give it up to Rihanna and Puma for scoring the “Shoe of the Year Award” for the Fenty x Puma Creeper at the 2016 FN Achievement Awards.

For this year we saw  some of the highly anticipated collabo’s from  Bape x adidas, Ronnie Fieg x ASICS, P.S.V x New Balance and more.

Now let’s check which sneakers made it to the list of 25 Best Sneaker Releases of 2016:

Worn by Michael Jordan during the 1988-89 season, the White Cement colourway is one of the most popular Air Jordans ever made.

The sneaker was originally released back in 1989 and later appeared in 1999, followed by another retro release in 2012. Following in the footsteps of the Air Jordan 3 Retro ’88 and the Air Jordan 6 Maroon, the Air Jordan 4 OG ’89 White Cement will have the sought-after “Nike Air” branding on the heel to go along with the premium remastered treatment.

ASICS closed its 25th Anniversary celebration of the GEL-Lyte III – by paying tribute to Ronnie Fieg, the NYC-based designer who played a major role in leading the split-tongued trend with his attack of collaborations that date back to 2006.

On this one New Balance joined forces with Singapore’s quirky female footwear store P.V.S, creating an eccentric alternative of the much appreciated 996 silhouette.

As the third stop on the adidas Consortium Tour, famed Berlin sneaker shop Solebox had the privilege of creating a custom version of the popular Ultra Boost sneaker. Using Berlin’s coat of arms as the source of inspiration for the silhouette, Solebox enlisted Hikmet Sugoer to bedeck the Ultra Boost in a grey uncaged knit upper, while suede hits on the tongue and heel cup add a never-before-seen element to the runner.

Two dominant forces in their respective fields joined forces for a limited collaboration that combines distinctive elements from both. adidas Consortium team with mastermind JAPAN to produce the NMD_XR1, a reworking of one of adidas’ most impressive models. The sneaker features a Flyknit upper with structured overlays along with the EVA midsole plugs. mastermind JAPAN place their graphic branding to the model’s tongue and TPU cage, whilst a full Boost sole rounds out the model.

The third 750 iteration from Kanye West and adidas Originals made a debut back in June. Setting it apart from the previous two 750s, the “Grey/Gum” version featured a luminescent outsole, in addition to a grey upper saddled on top. You already know the bots ate this one up within seconds.

adidas Rihanna’s Creeper silhouette in collaboration with PUMA was honored with the title “Shoe of the Year” by Footwear News.

Look out for the Velvet Pack Edition releasing early 2017.

This September, Kanye West and adidas Originals introduced a bold evolution of this style. The world’s most influential and sought-after silhouette debuts with a flash of colour.

Restyled yet true to its heritage, the YEEZY BOOST 350 V2 is crafted with beautiful, premium materials that infuse adidas’ technology with Kanye West’s unmistakable aesthetic. The 350 V2 makes an audacious play for colour with an upper composed of Primeknit in three impactful hues of yarn. A streak of solar red bears the mark ‘SPLY-350’. A semi-translucent rubber outsole and TPU sidewalls create a striking effect while providing superior traction.

Last seen back in 2013, Jordan Brand has decided to bring back the iconic and legendary colorway of the Air Jordan 1 that features a new premium leather upper. This Air Jordan 1 is notably known as the shoe that cost Nike $5,000 for violating the league’s uniform code.

The shoe became famous when Michael Jordan made his second comeback to the NBA to join the Washington Wizards. Even Kobe Bryant enjoyed the “True Blue” Air Jordan 3 as he wore them during the 2003 NBA All-Star Game.

Partnering with Packer Shoes makes complete sense as very few retailers that exist today have such a long legacy, vast knowledge and experience in the field. They’ve been in the game since 1907.

This collaborative NMD designed by Packer looked to adidas’ rich and colorful apparel archive for inspiration, adopting a classic color palette that was a prominent fixture in much of the brand’s ‘80s and ‘90s sportswear output. To add even more authenticity, the shoes were photographed at LA’s Tried & True Co., one of the premier destinations in the world for vintage sportswear treasures.

Revealing the Nike Special Forces Air Force 1, the evolution of the game is in mind as it coincides with the silhouette’s futuristic upgrade. Combining the Nike SFB and Air Force 1 into a winterized monster, you’ll find premium full grain leather, ripstop ballistic nylon, as well as new interwoven and adjustable ankle straps.

Pharrell is expanding his relationship with adidas Originals, and this year we saw the debut of Pharrell x adidas Boost sneaker.

This new collaboration between Pharrell and adidas Originals looks a lot like the adidas NMD that is highlighted with large text on the top of the shoe that reads “Human Race.”

There are several colorways of this silhouette that has already released.

In Celebration of the 20th Anniversary of Space Jam –  Jordan Brand re-released the classic Air Jordan 11 that was originally debuted by Michael Jordan in the film and later on the court.

20 years later, the “Space Jam” Air Jordan 11 features a remastered original makeover similar to what Michael Jordan originally wore during the 1995 NBA Playoffs with its traditional all-Black mesh and a higher-cut patent leather upper. Other details include a Concord Jumpman, stitched ’45’ on the back heel (not ’23), Nike Air insoles, White midsole and a translucent outsole, along with the Jumpman/Jordan inscribed on the tongue tab.

Known as the first Nike Basketball shoe to feature full-length visible Nike Air cushioning, the Air Max Uptempo’s original print ad heralded the shoe as having “The most Nike-Air cushioning we’ve ever put into a sole.” Standing the test of time thanks to the innovations in visible Air, the Air Max Uptempo returns to the forefront in a new Urban Haze colourway that features suede all throughout the upper with a contrasting White sole unit.

The shoe is constructed in a premium black nubuck upper with woven paneling referencing his braids, all in a deconstructed design with the usual padding removed to create a sleeker, lifestyle-minded silhouette. Further refinements to the Question by Hall of Fame include leather utilized for the lace gillies, inner lining, and sockliner, along with embossed leather branding throughout. Every pair will also come with multiple lace options in Philly’s alternate uniform colours.

The TRAPSTAR X PUMA DISC BLAZE sees the popular London-based fashion brand get its first footwear collaboration. This wasn’t just a chance collaboration for Trapstar – the growing London label had been in talks with Puma for a few years now and everything finally came together with this release.

The UK fashion label, known for its blacked-out apparel and growing fan base, hadn’t worked on sneakers yet. But their first pair is looking pretty solid with premium, black leather and red accents.

The fashion label dresses the PUMA Disc Blaze in an all-over leather upper for a simplified look. Finished in Black, even the DISC cage has been given a soft nubuck leather treatment. Illustrating Trapstar’s design attitude the sneaker includes Red accents on its DISC strap and a graphic Trapstar logo on the heel.

Safari print has been a staple since the mid-1980s. Born on the Air Safari and deriving from the mind of Tinker Hatfield, the timeless print now makes its way to the legendary Air Presto.

Back in 2013, Staple Design and PUMA joined forces to great effect on a collaborative “Pigeon” edition of the tried-and-true Suede and for this year, the two made a comeback with a new drop to cap off Summer 2016.

Nike Sportswear enlisted the holy triumvirate that is HTM to each design their own unique Air Max offering and what we’re left with is a minimalist LD-based design from Hiroshi in the Nike Air Max LD-Zero; a bold Nike Air Max 90 turned Ultra Superfly from Tinker; and a new take on the Nike Air Max Ultra from Mark Parker.

The trio released earlier this year on Air Max Day.

If you’ve been paying any attention to the recent adidas hype, you probably would’ve noticed that the UltraBOOST silhouette has become as hyped as they come – and if you thought it couldn’t possibly get any crazier than that …look out for more dope colorways in 2017.

The collaboration is a celebration of the early days of video games, honoring such classics as Super Mario Bros., Duck Hunt, Donkey Kong and The Legend of Zelda. In turn, a number of 8-bit-inspired artwork and characters, as well as an assortment inspired by Nintendo’s first console, are featured on various styles.