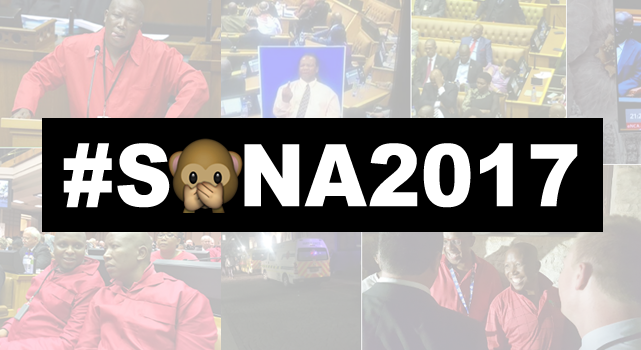 On Thursday night, President Jacob Zuma delivered his state of the nation address, even after that chaos we saw and members of DA and EFF leaving the house.
Julius Malema and his party were forcefully removed from the Parliament after giving no chance for the President to deliver his speech. During the removal of the EFF members we saw punches flying and big Fhhhh word being preached. But the engagement was on social media and we had a closer look at what our celebrities and media personalities had to say after all that drama. Amongst those who were sadden by the events of the #SONA2017 includes Black Coffee, Boity Thulo, Terry Pheto, Vusi Thembekwayo and Riky Rick to mention a few.

Jacob Zuma has always stood for one thing. Empowering Black people. Jacob Zuma has made more black millionaires than any other president.

Guys, we just witnessed grown women get manhandled, if not beaten, in parliament on Live TV! And everyone in there clapped?!!!!! #SONA2017

The international guests must be feeling awkward, like when you go visit a couple and they start fighting in front of you. #SONA2017

Am I the only one who believes nothing that Pres. Zuma says?
#SONA2017

And all the while Jacob Zuma sits as if he is playing the mannequin challenge. Quite an apt interpretation of his presidency. #SONA2017

It's not the mayhem that disturbs me about #Sona2017, nor the brutality of the disguised white-shirt police, but that #Zuma giggled.

Young South Africa, I hope we are watching this and we have to do better #SONA2017

Baleka Mbete thinks we are anticipating the #SONA17…. as soon as the president speaks we are out 😂😂😂😂

Why the fuck are adults clapping after seeing other human beings get brutally dragged out like animals????!!!! #SONA2017