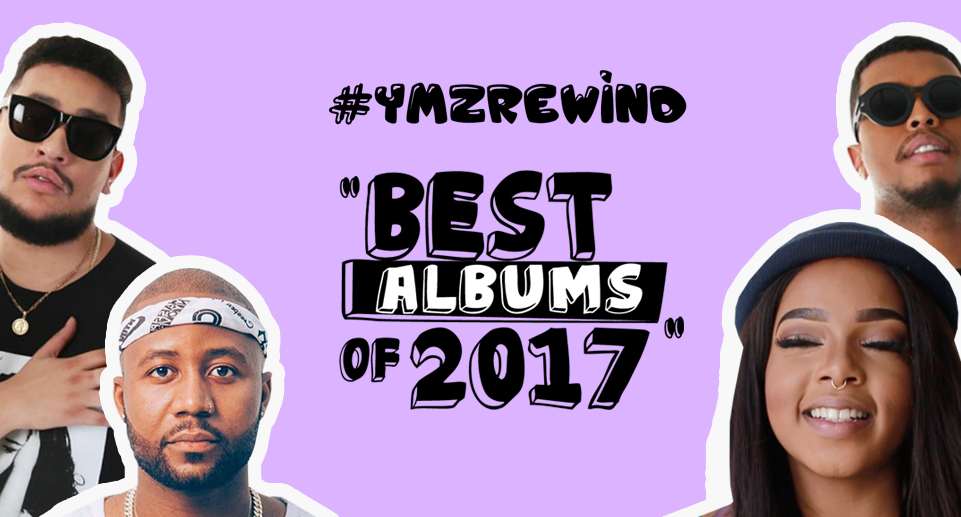 2017 was a musical year for all genres Hip-Hop, House, Afro Pop and more.
Even when 2016 was still a massive year, this year still managed to be a good year for more artists. We saw new artists on the scene delivering their debut projects, this includes Shane Eagle, The Nameless Band, Distruction Boyz, and a good damm joint album from AKA and ANATII. Hip Hop still managed to dominate as the most influential genre, and that made it not easy for us when putting together this list. Unforunately we have to leave out some of the good projects that released this very same year.

After that long wait, finally in 2017, Shekhinah delivered her debut project ‘Rose Gold’ and it is easily a masterpiece. Shekhinah made her mark from recent and successful collaborations; Back To The Beach (with Sketchy Bongo and Kyle Deustch), Let You Know (with Sketchy Bongo), On It (with DJ Sliqe) and Your Eyes (with Black Coffee) to mention a few. Since then, her fans have been yearning for more and all that comes to this debut project.

Rose Gold is simply a presentation that takes listeners through the many moods of the gifted singer. Over slick beats and hushed melodies, Shekhinah’s effortlessly gorgeous voice unwinds stories about modern life and love gained and lost. Shifting naturally between pop and R&B, her style and production echo minimalist EDM grooves heavily dosed with funkified swing.
Rose Gold is definitely an album that has put her in the spotlight.

Cassper Nyovest’s recent album ‘Thuto’ is indeed his best work ever, and that’s why it slipped easily on the list.
Black Thought (The Roots), Goapele, Nadia Nakai and Riky Rick are just a couple of the features on the album.

Part of the tracklist includes; two samples; Malaika’s Destiny (released in 2003) and Dennis Ferrer’s Touch the Sky (released in 2006). Destiny is produced by ANATII with Goapele on the vocals.
This is Cassper’s 3rd album, which follows the successful debut album ‘Tsholofelo’ which released in 2014 and ‘Refiloe’ in 2015.

As we all know, AKA and ANATII released their joint album ‘Becareful What You Wish For’ sometime this year, and this was a gamechanger for Hip-Hop scene.

The album brings together AKA’s deep lyrical skills and ANATII’s elements of production and melody. The project is packed with 10-tracks including previously released jams; 10 Fingers, Holy Mountain, Don’t Forget To Pray and The Saga. By just looking at the track list you will notice that the project has a stronger religious theme with biblical terminology to the lyrical content.

The album is a solid release which is the first project from both AKA and ANATII. The sound is pure hip-hop, heavy rap on the lyrics with soulful elements. The message is broader and by putting only 10-tracks this shows you how both rappers wanted to place a tight content with meaning and substance.

Another very notable release this year is eMTee’s second studio album titled ‘Manando.’
The album is packed with 20-tracks which include leading singles; Ghetto Hero, Corner Stone and Me & You. The album features few guests; Naija superstar – Tiwa Savage and Ambitiouz’s very own Saudi, Sjava and Njabulo.

On this project, eMTee carries on his signature style of rap while dropping in some soulful hooks. The album fuses hip-hop elements mixed with trap, a touch of afro-beats and mellow sound. Compared to his first offering ‘Avery,’ this project is more solid, well-orchestrated and clearly proves that eMTee has found his voice and sound.

The producers who worked on the album include; Ruff, Lunatik Beatz, Tweezy, Christa, BizBoy, Co Kayn, Lisa and Ronepidemic.

5. Distruction Boyz — Gqom Is The Future

Distruction Boyz made a statement and opened a door for the Gqom genre when they released ‘Gqom is the Future.’
Thobani ‘Cue’ Mgobhozi and Zipho ‘Gold’ Mthembu are popular paved their way into the industry after WOLOLO and Shut up and Groove.

Gqom is a dark and hypnotic club sound from Durban but has reached global standards and Distruction Boyz aims to make history. The album is packed with 13-tracks including their lead single Shut up and Groove. Raising the bar with A-list talent, they included Dj Tira, Rude Boyz, Tipcee, Benny Maverick and more as part of the album.

Produced by DJ Tira – the project is a compilation of latest work by Afrotainment’s artists. The tracklist consists of 16 songs including; Malume (Dj Tira), Amadada (Tipcee,Emza) and Mamelani (NaakMusiq) which are already street and radio anthems. Other artists included on the project include; The Nameless Band, Duncan, Joocy, DJ Cndo, Zodwa Wabantu and DJ Sox to mention a few.

The sound on the album is a combination of Gqom, Durban groovy and ratchet house, a touch of afro-beats, laid-back jazzy grooves and abit of samba elements.

The fact that the sound on this compilation is a perfect fit for everyone, makes it a successful releases for 2017.

Prince Kaybee released his anticipated second studio album this very same year.
The album is packed with 13 super tracks, setting the note high for the local House Music scene. We know Prince Kaybee best for his excellent work when it comes to production. And this is exactly what he reflects on this project which follows his first delivery Better Days, released back in 2015.

The tone of the album is set between mellow and groovy, and this whole album carries on Prince Kaybee’s signature sound of nothing but street anthems, more vocals and his approach to trying out different elements and ofcourse his mad love for the guitar.
This is a beautiful presentation by Prince Kaybee; an album packed with hits, an album for everyone and all sort of moods.

K.O aka Mr Cashtime delivered his much-anticipated studio album ‘Skhanda Republic 2’ just a few months ago.
The album is packed with 12-tracks which include leading singles; Pretty Young Thing, No Feelings and Call Me. On this one, K.O brings a solid and few featured guests including Black Coffee, Shekhinah and Runtown.

The album carries on K.O’s signature and unique sound of Skhanda brought together with a touch of Kwaito and Hip-Hop elements. It’s only on the three collaborations; Above the Water (feat. Shekhinah), Call Me (feat. Runtown) and SA Rising (Black Coffee), where we see K.O jumping to a different style; laid-back, mellow and touch of afro-beats.

10. The Nameless Band — The Greatest Hits

The Nameless brand had to be on this and ofcource on the Top 10. This is their debut project ‘The Greatest Hits’ which many people slept on. The trio present a very unique and deep style of music. Call it a new age Afropop or Afro Soul, but with groovy elements all over. We cannot label this album with a single genre, as the trio managed to explore some versatility and experiment different sounds. It comes with only 10 new tracks which include enjoyable jams like; Love Like This, Ngakwenzani, Never Again, Lengoma, Sondela and more.

And that’s our Top 10 list, and like we said, there are plenty of nice album’s that couldn’t fit on this list. But feel free to let us know your thoughts…

Here are Nike’s new NBA ‘City’ Edition uniforms
Another stunt or not? AKA & Bonang call it quits