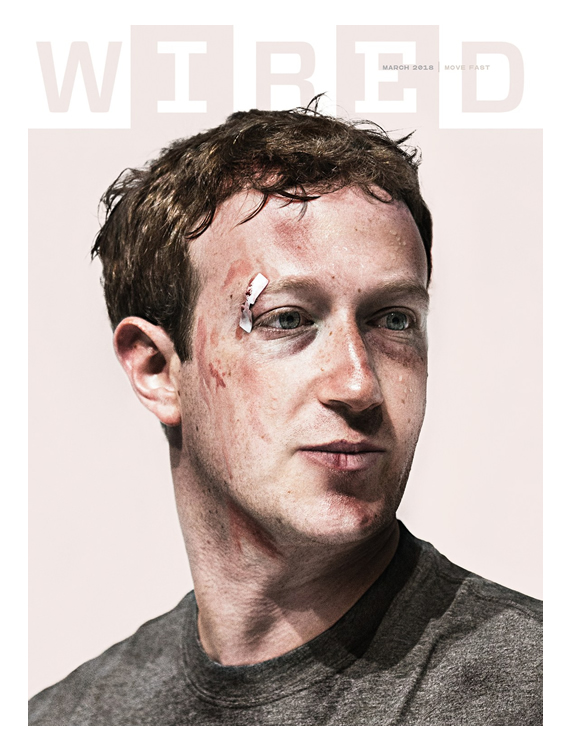 WIRED put out their March 2018 cover which is about Facebook CEO – Mark Zuckerberg.
With so many blows Zuckerberg has taken (through Facebook), the cover is meant to display exactly that, a sign of being beaten/bruised.

You will be surprised to know that this cover was actually created from scratch since Zuckerberg was not available to shoot.

The photo-illustration was created by Jake Rowland (New York City–based artist) who used an existing photo of Zuckerberg together with two photos of models made up to look bruised and bloodied.

“WIRED wanted a portrait of a beaten-up, battle-torn Zuckerberg; the only problem was he was not going to be there for the shoot.1 This required building a composite portrait. This particular image contains elements from four different photographs. Two were stock photos, two were shot by me in New York of models made up to look bruised and bloodied, and only one of the photographs was an actual image of Mark Zuckerberg. The final result is sort of a digital collage of these separate elements, a composite, that is a blend of fact and fiction, right down to the expression on his face.”

How brilliant is that!.. The full story is out and WIRED titles it ‘INSIDE THE TWO YEARS THAT SHOOK FACEBOOK—AND THE WORLD.’ You can read it here.