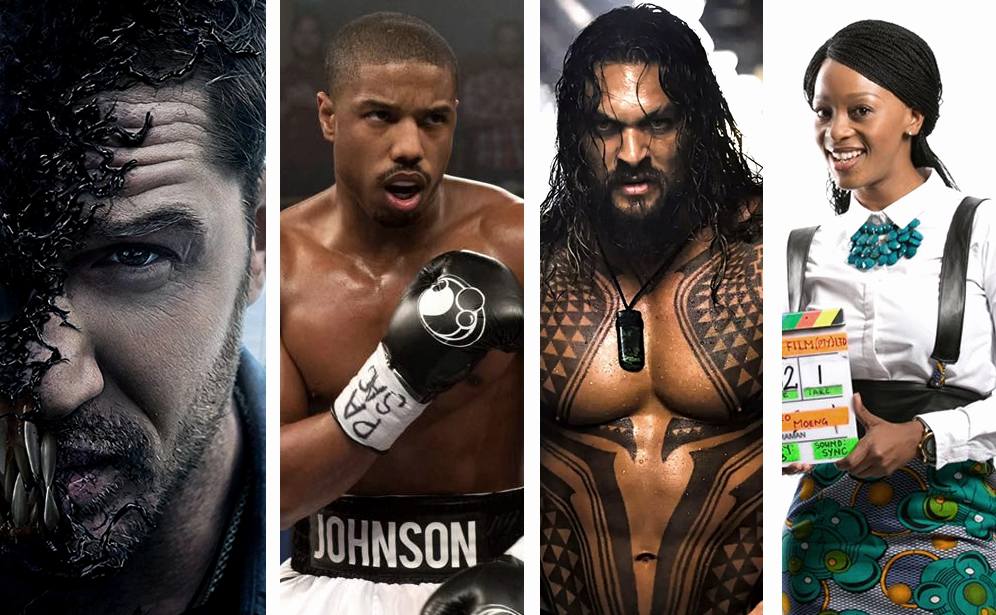 It’s a few months to go before we wrap up the year 2018.
For our movie fans, we have put together a list of movies you have to watch before the year ends. This year has brought us many surprises when it comes to blockbusters. From earlier this year when Black Panther was the talk of every town and dominating with numbers at the global box office.

Fifty Shades Freed, Game Night, Avengers: Infinity War and Inxeba are some of this year’s releases that got people going to cinemas.

So before you wrap up your year, make sure to see the following 10 Movies:

Venom is definitely one of the most-anticipated films of 2018. The film is directed by Ruben Fleischer and stars Tom Hardy, Michelle Williams, Riz Ahmed and more.

Journalist Eddie Brock is trying to take down Carlton Drake, the notorious and brilliant founder of the Life Foundation. While investigating one of Drake’s experiments, Eddie’s body merges with the alien Venom leaving him with superhuman strength and power. Twisted, dark and fueled by rage, Venom tries to control the new and dangerous abilities that Eddie finds so intoxicating.

A new local comedy-drama film ‘Baby Mamas’ will arrive on our screens this October.
The film is directed by Stephina Zwane and produced by Salamina Mosese, who is also on the cast with Dineo Ranaka,Thembisa Mdoda, Kay Smith, Jonathan Boynton Lee and more.

In this film:
Four women share all their experiences on the joys and woes of being single Moms, while still searching for true love. This is a comedy drama revolving around the daily lives, loves and drama of four professional women who are all in different stages of their own real-life baby mama drama. A sisterhood develops among these four very different women, as they find in each other the strength and courage it will take to navigate the treacherous waters of the relationships, good and bad, that they have with the men in their lives.

Halloween is the 11th installment in the Halloween franchise and continues the 1978 film of the same name. The film stars Jamie Lee Curtis, Judy Greer, Nick Castle, Andi Matichak, Will Patton, and Virginia Gardner.

Jamie Lee Curtis returns to her iconic role as Laurie Strode, who comes to her final confrontation with Michael Myers, the masked figure who has haunted her since she narrowly escaped his killing spree on Halloween night four decades ago.

First Man is a bio/drama film executive produced by Steven Spielberg and is based on the book First Man: The Life of Neil A. Armstrong by James R. Hansen.

First Man tells a story of NASA’s mission to land a man on the moon, focusing on Neil Armstrong and the years 1961-1969. A visceral, first-person account, based on the book by James R. Hansen, the movie will explore the sacrifices and the cost on Armstrong and on the nation of one of the most dangerous missions in history.

The movie stars Michael B. Jordan and Sylvester Stallone, reprising their roles of Adonis Creed and Rocky Balboa.

Creed II is a sequel to the 2015 critically-acclaimed and crowd-pleasing 2015 hit Creed, which grossed more than $170 million at the global box office. Ryan Coogler returns as the executive producer, Steven Caple Jr. is the director.

Creed II is about going back to basics to rediscover what made you a champion in the first place, and remembering that, no matter where you go, you can’t escape your history.

The Grinch (Dr. Seuss) is another hot release for the fans of 3D animation. The film is directed by Yarrow Cheney and Scott Mosier and is narrated by Pharrell Williams with voices of Benedict Cumberbatch, Rashida Jones, Kenan Thompson, Cameron Seely and Angela Lansbury.

The Grinch tells the story of a cynical grump who goes on a mission to steal Christmas, only to have his heart changed by a young girl’s generous holiday spirit.

Aquaman is a superhero film based on the DC Comics character (Aquaman). The film is directed by James Wan and stars Jason Momoa, Amber Heard, Willem Dafoe, Patrick Wilson and more.

Arthur Curry learns that he is the heir to the underwater kingdom of Atlantis, and must step forward to lead his people and be a hero to the world.

Spider-Man: Into the Spider-Verse

On the run in the year 1987, Bumblebee finds refuge in a junkyard in a small Californian beach town. Charlie (Hailee Steinfeld), on the cusp of turning 18 and trying to find her place in the world, discovers Bumblebee, battle-scarred and broken. When Charlie revives him, she quickly learns this is no ordinary, yellow VW bug.