Connect with us
133
SHARES 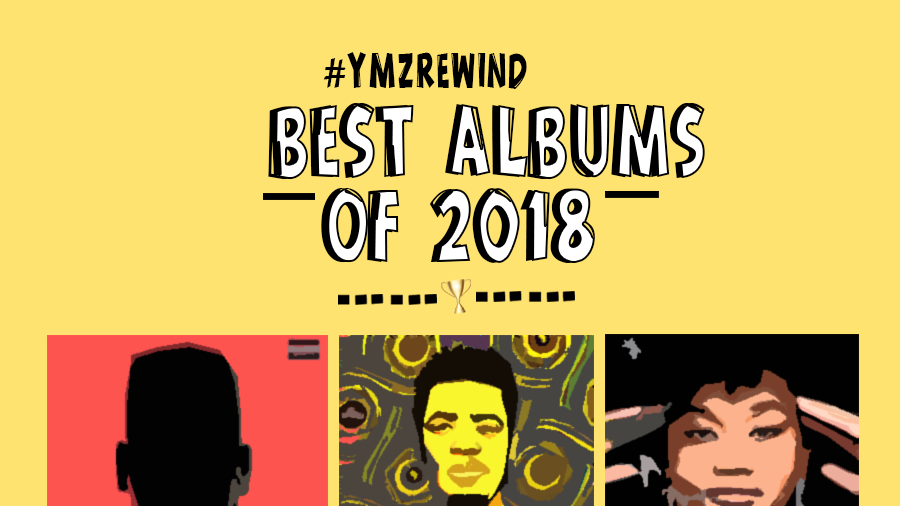 2018 was a definitely a musical year from all genres Hip-Hop, House, Afro Pop and more.
We saw new artists on the scene delivering their debut projects, this includes Sun-El Musician, Simmy and  Mlindo the Vocalist to mention a few. While major industry names like AKA, Zonke, Sjava cut through the year with solid releases that take the spotlight on the below list of Top Albums of 2018.  Hip Hop still managed to dominate as the most influential genre, and that made it not easy for us when putting together this list. We have considered albums that has singles on high rotation on multiple radio stations, TV music shows, charts on iTunes, Spotify, Shazam and the street culture.

We cannot also leave out the sales and accolades – which helped weigh in our selection. Other factors which influenced the selection includes; longevity, production and originality.

We have picked the albums across all genres, either Hip-Hop, Kwaito, House, AfroPop etc. And all the albums below were released/debuted in 2018.

AKA – Touch My Blood

AKA’s Touch My Blood was definitely one of the most awaited albums to the hip-hop industry and music at large. This is his third (fourth if you count Be Careful What You Wish For) and was said to be his last album – but he later scrapped the statement and confirmed he preparing for his next release. SupaMega did reveal that he did not achieve most collaborations this year, and working with industry peers like eMtee and more. However he promised come 2019, this will all change.

Touch My Blood was led by singles such as Caiphus Song, The World is yours, Sweet Fire, StarSigns and later translated to Fela in Versace (feat. Kiddominant) which became the biggest song off the album.

Comprised of 16 songs in total, the album features production assists from Tweezy, Anatii, Makwa Beats and Gemini Major. Some standout features that appear on the album include JR, Okmalumkoolkat, Kwesta, L-Tido, Yanga Chief, Stogie T and Kairo (AKA’s daughter) concludes the album with an outro on Daddy Issue II song.

In November, The SupaMega announced that the album is now on platinum status. Months ago when the album released, it took only a week to sell over 15 000 copies to reach gold.

Sun-El Musician – Africa to the World

Sun-El Musician made his major way into the scene when he released his debut album ‘Africa to the World’ this year. The album is packed with 13 super tracks, setting the note high for fans of his slow-tempo electronic grooves and tasteful vocal house. The album includes his previously major singles like; Akanamali (feat. Samthing Soweto), Bamthathile (feat. Mlindo the Vocalist), Sonini (feat. Simmy, Lelo Kamau) and Ntaba ezikude (feat. Simmy).

After dropping Akanamali last year, fans could not stop yearning for more of his work and with Africa to the World he delivers a majestic project.

Sjava recently released his lengthy and much-awaited second studio album to close off 2018.
Titled ‘Umqhele’, the album is packed with 18 new tracks (double disk) and it releases under Ambitiouz Entertainment. Still staying true and consistent with his sound, Sjava delivers a heart-soothing tracklist filled with Soulful Afro-pop melodies, upbeat electronic mood mixed with Trap and R&B sound. With Sjava flipping between Zulu and English lyrics, the album preaches a message about love, giving praise to women, humanity, culture and real-life issues in everyday life.

Without a doubt, those who have enjoyed Sjava’s lyrical content can look forward to more deep messaging on songs like Izitha, Linda, Amagama, Eweni, Umama and Intombi Yami to mention a few.

The album is a follow-up after his recent Ep project ‘Umphako’ released in July and features his smash single Abangani featuring label mates; Emtee and Saudi.

This marks his second studio album since the release of ‘Isina Muva’ which debuted in 2016.

Nasty C’s 2018 album ‘Strings and Bling’ is another proof that he’s still got bars for days.
The album comes packed with 17-tracks and only invites A$AP Ferg, Kaien Cruz and Rowlene as featured guests. With this album, Nasty C proves he has reached a different level of maturity with his lyrical content and exploring different sounds in Hip-Hop. His style and sound on this album comes more solid and offers a listener alot to think about while touching on his childhood, love, heartbreak and more subjects.

2018 is the same year Nasty C cut ties with Mabala Noise and joined Universal Music. He later announced his own record label Tall Racks Records which he first signed Rowlene under.

Simmy is the hottest thing in the scene right now and you can perceive her work from her amazing and unique voice. She came to the scene after major collaboration with Sun-El Musician on two successful singles; Sonini and Ntaba ezikude. Since then fans have been anticipating a solid release from her. Simmy released her debut ‘Tugela Fairy’ through Sony Music Entertainment Africa. With this solid release, Simmy delivers groovy and vocal house music tunes with a touch of Afro-pop sound. The album is led by singles such as; Ubala (feat. Sun-El Musician), Incwadi Encane (feat. Stone), Hamaba Juba, and the current smash jam Umahlalela.

The production of the entire album is super clean and gives listeners a happy, joy and love mood through many subjects Simmy preaches on the lyrical content.

With her fifth studio album L.O.V.E., Zonke gives a masterclass in the artistry of remaining unwaveringly true to a signature sound, while dialing it up, with searing confidence, to the heart of the current music moment.

This is evident on Tonight, the first single off Zonke’s first full-length album in three years. An irresistible slice of late-night sensuality, filtered over bass-heavy grooves and spliced with subtly suggestive piano parts, Tonight is a siren call for those who know that the only moment that counts is the present one. Already a chart-topper, it’s one of the most assured tracks to have emerged from Zonke’s formidable songwriting pen.

NdiliMpondo is a homage to the importance of national identity, and Uphelelwa Lixesha is a cautionary tale to unfaithful lovers. Soul to Keep with rapper Kwesta hearkens to her hip-hop roots as she crafts a funky, soulful arrangement.

Back in November, she received Gold plaques for this same album another one for the lead single Tonight and a Platinum plaque for her hit record Reach It (off her previous album Work of Heart).

Anatii dropped his much-awaited second solo album ‘IYEZA’ back in October through his record label YAL Entertainment.
The album is packed with 10-tracks and has zero features, with the bold and artistic artwork delivered by Nika Mtwana.

Anatii has traveled to Durban, Eastern Cape and LA to connect with people and look for inspiration for this project which he describes as spiritual and therapeutic. And if you recall, Anatii confirmed the album has no features.

The album is headlined by tracks such as WENA, NGOZI, EHLATHINI and NDAWENI.
NTLONI, the second single off IYEZA is a burst of new energy from a genius that has conquered local hip-hop. He shows off his grit and bite with this banger that is set to earn him more street cred.

eMTee released his third studio album ‘DIY 2’ back in September, still with Ambitiouz Entertainment.
After two successful releases, Avery (2015) and Manando (2017), eMTee pushes with ‘DIY 2’ to prove that he’s still about good records.

On this album, eMTee speaks out about his struggles, wins and everyday real life issues.

This is definitely another solid delivery from eMTee dropping ear-pleasing hip-hop beats and spitting heavy kasi raps and a touch of soulful hooks.

BigStar Johnson’s ‘Me & Mines’ is another album that deserves the spotlight.
The album is packed with 12 tracks and is led by SGUBU as well as Closer and fan favourite Time Of My Life.

Looking through the playlist, BigStar took it easy and only invited few names on features, including; Rouge, Jay Claude, Zocci Coke Dope, Kaylo, The Dreamers and Kwesta.

BigStar Johnson’s Me & Mines album reflects where he’s currently at as a musician, as well as in life. The rapper took a unique approach to his Me & Mines album that will be a pleasant surprise for many. It’s not your typical Hip Hop album. It has a lot of 90s nostalgia and has already been pegged to be a future classic that South Africa can look back on in future and enjoy.

The album puts spotlight on melodic, memorable songs that are firmly rooted in vintage hip-hop. On Two Cups (feat. Rouge) they take on Donell Jones’ 1999 U Know What’s Up to add cool rhymes and jazzy melodies.  SGUBU is a kwaito-inspired jam bringing retro groovy beats and centric kasi raps from Bigstar and Kwesta.

Mlindo The Vocalist finally heeds his fan’s call by dropping his debut album ‘Emakhaya’  where he pleases with sounds of healing and comfort.

The album is a major statement from Mlindo, presenting a listener with heart-soothing and rhythmic afro pop/soul jams. One can describe his style as a fusion of Afro-pop with African beats mellowed with some pure traditional music.

The album comes packed with 16-tracks including leading singles; AmaBlesser (feat. DJ Maphorisa) and Macala (feat. Kwesta, Thabsie and Sfeesoh). He’s joined by Sjava on Egoli, and heart-pleasing jam, and invites Shwi Nomtekhala to join Wamuhle, flavored from their Ngafa.

Other featured acts on the album include; DJ Maphorisa (who played major in production, Vyno Miller, Rayvanny and Sha Sha.