Connect with us
4.8k
SHARES 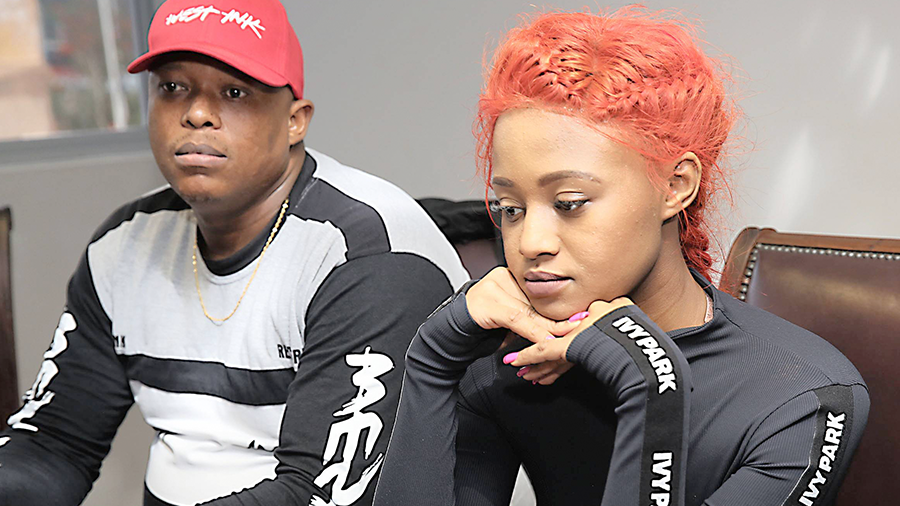 After his arrest earlier today, Mandla Maphumulo, famed as Mampintsha has been granted bail of R2 000 after appearing at Pinetown Magistrate’s Court. He will return in court on 15 May 2019.

It was earlier revealed that Mampintsa has opened a case of assault against Babes Wodumo.

Pat Magwaza (lawyer representing Mampintsha) told eNCA: “He was assaulted so he has opened a case of assault against Simelane. He was then defending himself when the video was made.”

Mandla Maphumulo, famed as Mampintsha, has been arrested for assaulting his girlfriend Bongekile Simelane, popularly known as Babes Wodumo.

Mampintsha handed himself to Westville Police Station. The kwaito star is in police custody and will appear in court soon.

In the Instagram LIVE recorded video, Babes Wodumo goes LIVE on her Instagram account, then moves away to continuously ask Mampintsha ‘u ngi shayelani?’ Meaning why are you beating me up. Just after a minute, Mampintsha appears in the video beating up Babes, while raising his voice at her.

The video has blown up on Social Media, and  few celebrities including Cassper Nyovest, Nadia Nakai took to Twitter to share their thoughts:

A statement by DJ Tira: 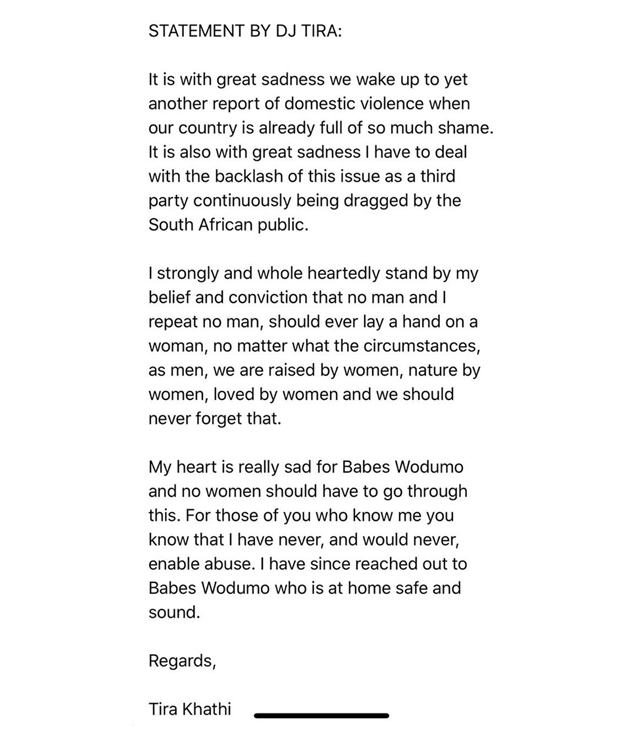 Cassper Nyovest: I really wanna see what the cops are gonna do now that there’s hard evidence that the whole country is watching. My guess is NOTHING. I have lost all confidence in our police and our justice system.

Nadia Nakai: I really wanna know WHO can help her? Who can Physically take her out of the situation and protect her. Cos once he gets a chance to talk to her, manipulate and mentally abuse her, trick her into believing he loves her and he’ll change. The aftermath is sooo dangerous

Mo Flava: Mampintsha has a problem,and something needs to be done. Too many men are getting away with nonsense. How do we rid society of such? How do we make sure that we have less guys like this?

DJ Zinhle: Mampintsha needs to be stopped. I hope they make an example out of him so every man knows that hitting a woman is unacceptable and will not be tolerated. My heart breaks for Babes. 💔

Dineo Moeketsi: Arrest Mampintsha and let him face the full might of the law. There’s no rehabilitation for sexual groomers. He is poison and he is a dangerous Male!!! The media must remove anything associated with him from rotation. Ministers must act, the system must act. No more of this shit!

Maps Maponyane: F*ck Mampintsha! Surely there’s NO defending him and his abusive ways.
If he is not made an example of, the system will be blatantly failing victims of abuse. I just hope Babes uses the same courage she had to take the video, to press charges against him this time around.

REASON: Mampintsha, Tira and Danger are like my industry big brothers. They Always advise and support me when im DBN. So for me to see this… is fucken painful. Its so fucken painful. Im dissapointed. Im hurt. And im defeated. No woman deserve this. EVER!

Les Da Chef: Saw that Mampintsha vid earlier. Bo satane fela. Wtf. You can feel the pure evil in that man. Can’t imagine how fearful Babes must be in his presence. We all know how grooming works and psychopaths operate, don’t come here with “she should have left, it’s her fault” crap.

Sizwe Dhlomo: First off, fuck Mampintsha! I said it then & I’ll say it now. He needs to be arrested & I hope it happens today. For those that keep asking though, this doesn’t change a damn thing about how Masechaba handled that situation. That sh!t was wrong too.

Natasha Tahane: It’s most likely not my place to update you guys but I know a lot of you are truly worried. Managed to get hold of Babes. She’s safe. Please keep her in your prayers.

UncleScrooch: Mute Mampintsha Arrest Mampintsha Stop Booking Mampintsha
Sies maan. Women are weaker than men physically, and you are using that to your advantage. Should be ashamed of yourself.

The birth of this story dates back to last year when Babes Wodumo was Interviewed on Metro FM (Afternoon Drive), during the interview with Masechaba Ndlovu and Mo Flava , Babes Wodumo claimed that Mampintsha (to whom she was engaged with), physically assaulted her.

Live on air, Masechaba confronted Babes about the alleged abuse, saying that she had a friend who had taken Babes in, when Mampintsha allegedly punched her in the face and broke her leg.

For those who missed that interview, check it out below:

In response to those allegations, Mampintsha, released a statement to respond to what he called “public hysteria” emanating from the interview.

And was also given a chance on Metro FM where he denied any form abuse on Babes Wodumo. To his response Mampintsha told the listeners that his name was dragged and disrespected. Take a listen at the interview below: