Connect with us
394
SHARES Masecha Ndlovu has said her last goodbyes to her Metro Fm listeners during the Friday (29 March) show. The station has also confirmed the news wishing her best in future endeavours.

*Main Story
According to a report by Sunday World, Metro FM will be saying goodbye to Masechaba Ndlovu.
It is revealed that Masechaba was told by the management that her contract will not be renewed. As many knows, March-April, local radio stations make a number of changes to their on-air lineup. 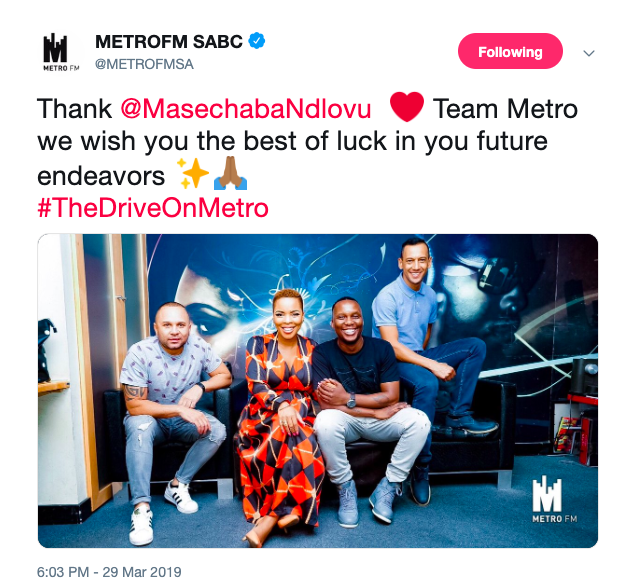 Masechaba joined the station back in 2017, and was put together with Mo Flava to host the afternoon slot ‘The Drive’.

Sunday World can reveal that the Metro FM Drive presenter, who co-hosted the show with DJ Mo Flava, was informed by management that her contract would not be renewed when it expires at the end of this month.

A source told the publication that Masechaba is being let go because of her controversial interview with Babes Wodumo.

Live on air, Masechaba confronted Babes about the alleged abuse, saying that she had a friend who had taken Babes in, when Mampintsha allegedly punched her in the face and broke her leg.

For those who missed that interview, check it out below:

Sunday World further reveals that Mampintsha has laid a complaint with the BCCSA complaining that he was not given a right of reply.

The station will also be letting go of Rams Mabote, who will reportedly be replaced by Kgopedi Lilokoe.

Sean Wotherspoon confirms the end of SW Collabs with Nike
#YMZShots: Our Favourite 10 Shots of the Week