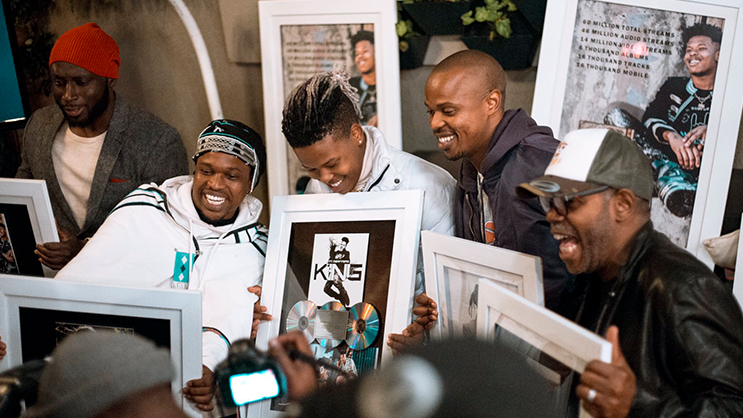 Nasty C is celebrating a huge milestone and major numbers for his 2018 album ‘Strings and Bling.’
The album has been certified double platinum ‘with sales in excess of 46 THOUSAND FIVE HUNDRED units’. Plus to that, all 17 tracks on the album are certified either gold, platinum, double or triple platinum.

His label, Universal Music confirmed heavy streaming numbers and digital sales. Universal confirms that the album reached 60 million total streams, 46 million audio streams and 14 million video streams. Following the announcement, the rapper did confirm a new album ‘Zulu Man With Some Power’ is on the way, even though he did not give away much about the release details.

I’m a Zulu Man With Some Power 💪🏾
I GOTTA THANK GOD, MY FAMILY & MY FANS. CONGRATULATIONS FANILY WE DID IT 🙏🏽 EVERY SINGLE MOTHAFUCKN SONG ON #StringsAndBling IS CERTIFIED.. GOLD, PLATINUM, DOUBLE PLATINUM, TRIPLE PLATINUM!! WE FUCKING DID IT!!!! THANK YOU!! NEW ALBUM SOON COME pic.twitter.com/Ju5FIP24LV

The album was released in July 2018, comes packed with 17-tracks and only invites A$AP Ferg, Kaien Cruz and Rowlene as featured guests. With this album, Nasty C proves he has reached a different level of maturity with his lyrical content and exploring different sounds in Hip-Hop. His style and sound on this album comes more solid and offers a listener alot to think about while touching on his childhood, love, heartbreak and more subjects.