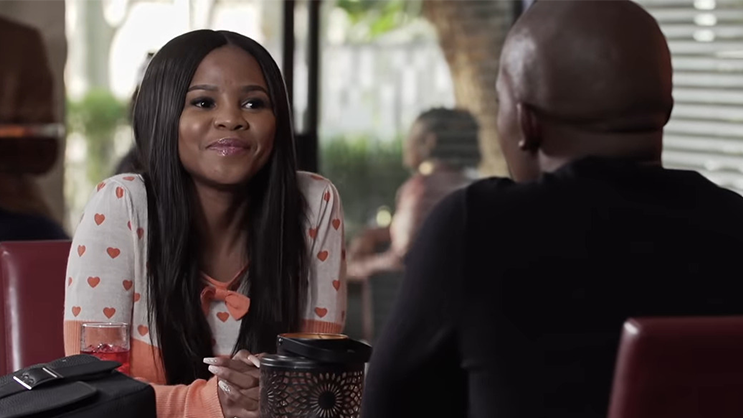 This is what’s coming up on The Queen for July episodes.
The Queen is a fast-paced telenovela about a dedicated wife, mother and successful businesswoman, Harriet Khoza (Connie Ferguson) who is forced to do the unthinkable when her husband’s (Treasure Tshabalala) secret comes to light.

Patronella’s actions finally catch up with her. Harriet hatches a plan with Lindiwe that leaves Brutus and Shaka feeling betrayed.

Harriet takes the heat for her decisions but she’s not shaken. Jerry and Vuyiswa make a big decision about their future.

Too Much baby Talk!

Jerry and Vuyiswa get excited about the future. Gracious is in a desperate financial fix. Shaka and Brutus regret their decisions.

Mmabatho tries to take control and it backfires. Kagiso and Kea make the best of their situation. Jerry receives some devastating news from the doctor about his health.

To Health And Wealth!

Kagiso and Harriet make the best of their situation. Jerry struggles with his secret.

Harriet, Kagiso and Kea are barely getting by and the Khoza name gets smeared and winds up the talk of the town. Jerry works overtime to keep his health issues to himself. Shaka gets some positive news.

Sthembiso tries to convince Jerry to open up about his diagnosis. Mmabatho is not happy when Gracious pampers herself. Harriet tries to close a deal with an old foe.

Jerry is confronted with the truth, but he’s still in denial. Kagiso puts his family in jeopardy, when he chooses morals over money. Mmabatho is falling apart.

A Not So Sweet Romance!

Vuyiswa wants out. Shaka’s family is falling apart while Kagiso takes one for the team.

Better The Devil You Know!

Jerry decides to accept this fate. Kagiso has a difficult decision to make as his family is hit with another setback.

Jerry is losing his fight to cancer. Harriet, Kea and Kagiso have nowhere to go.

Jerry’s makes peace with his fate even though it breaks Vuyiswa’s heart. Harriet’s rock bottom seems to be an endless abyss and that gives Shaka and Brutus some joy

Just when things look darkest, there’s a glimmer of hope for the Khozas. Thato has a plan to get under Jerry’s tough skin.

Jerry is ambushed. Harriet’s hands are tied while her enemies think about getting revenge.

A Cloud on the Horizon

Jerry finds out the cancer has spread. Brutus and Shaka face a new enemy. Kagiso has a tough decision to make.

Harriet has to take matters into her own hands and deal with a nagging frenemy head on. Shaka and Brutus are finding it hard to settle in their new place.

Jerry and Vuyiswa choose love. While Shaka and Brutus prepare to fight for their lives, Harriet sees another door close in her face.

End Of The Road!

The Khozas give in and accept their fate but things are about to change again. The Maakes’ fortunes change for the worse.

Mmabatho gets a very unexpected visitor. Jerry leaves the Maake’s devastated. Harriet plots how to make her way back to the top.

Harriet’s grovelling is met with some serious resistance. The Maake household finds itself divided over Jerry’s wishes. The Khozas’ climb back up the food chain is seen as a victory for most

Amo and Vuyiswa face off. Harriet gets a hint of Zodwa’s plans for her. Brutus prepares for a deadly family feud.

TEASERS: Coming up on ‘Skeem Saam’ in July 2019
The Top 10 Best Sneaker photos of the week