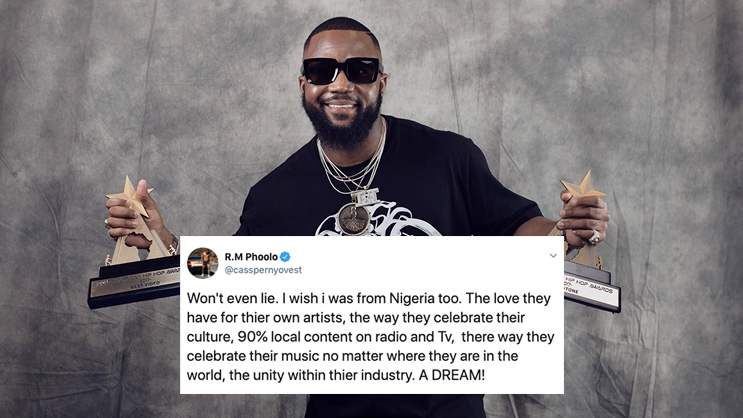 Rapper, Cassper Nyovest has fired up a conversation on Twitter that left fans divided.
Cassper has gone onto the social media site to express how South African artists are not united and the industry itself does not respect the artists. His comments follow the champion work and collaborations been executed by Nigerian artists like Wizkid, Burna Boy and more.

“Too gone. We could have the same thing but nah, we would rather fight amongst ourselves and cut down our airplay to cut the reach. Disrepect our own sound and artists. That’s our vibe here. Niggas not playing your music cause they don’t like you, you know? Those vibes. We lost!”, Cassper posted.

Further to that, the rapper has described the cold shoulder he has recently been getting when trying to reach out for collaborations with local artists.

“Tried. Niggas ignoring my phone calls and Dms. Nobody wants to fuck with each other ouchea. It’s all Egos. Who gone make it on his own? Thats the race we running in SA.”

But what swayed the conversation to a different direction is when Cassper shared that he wished he was Nigerian, because he felt he would receive more love and support from fans.

This has left fans angry as they feel like the rapper is selfish and is not appreciative of the love and support masses have shown him here in South Africa.

Followers on Twitter including artists like AKA and Ice Prince have commented on the statement by Cassper with a bunch of tweets standing proud for South Africa.

You cannot disown your own people and in the next breath want to LEAD them. Somebody had to say something. Unfortunately or fortunately(depends on how you look at it) … somehow it must always be me. Goodnight. My work is done here on this stupid app nxaaa.

Africans Love #SouthAfrica And will always hold the country up and high up forever !!!!! We just need Thesame Love back with no comparisons, Generalism or divisions in any form or shape and Everything will be Nice @casspernyovest You are as Nigerian as i am South African.

“Cassper is ungrateful” says Someone who has never bought a CD, Merchandise or a Fillup ticket. Ayyyy Fokk mahn. We those who buy aren’t saying shit cause we understand him pic.twitter.com/Bw3FEUgYND

Someone once said that Cassper is never happy if someone else is the focus of attention and that he'll always find a way to make something that isn't about him alllllll about him. That person was right.

Africans Love #SouthAfrica And will always hold the country up and high up forever !!!!! We just need Thesame Love back with no comparisons, Generalism or divisions in any form or shape and Everything will be Nice @casspernyovest You are as Nigerian as i am South African.

Though what Cassper said offended a lot of fans, there's something to take from the conversation that's happening right now. South Africa needs to take pride in its local content and support it fully. And South African content creators also need to take pride in their Nation.