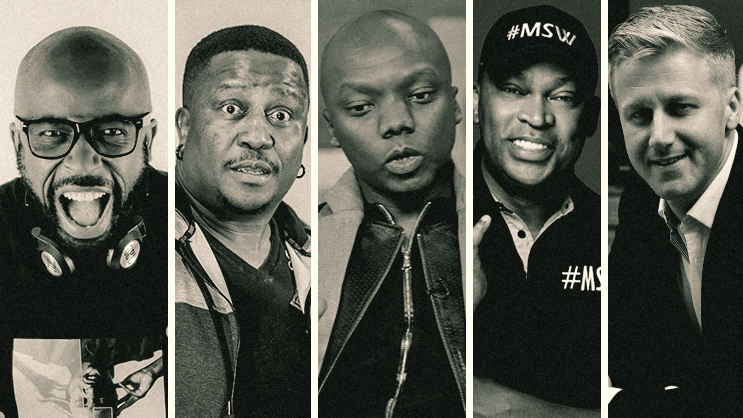 Last week Gareth Cliff had a sit down with radio giants; Sbusiso Leope (DJ Sbu), Thato Sikwane (DJ Fresh), Thabo Molefe (Tbo-Touch) and Robert Marawa for 2 hours during a special broadcast #PureConversations, talking all things radio, media, and the state of the industry.

They all have enjoyed a meteoric rise, bursting into the radio mainstream with primetime shows. DJ Sbu, DJ Fresh, and Tbo-Touch were once part of Metro FM, and in the conversation, they talk about how they connected at some point in their lives, joining radio, how the industry has changed and being fired at the SABC.

Robert Marawa joins them later in the conversation. However, he is still holding his simulcast broadcast on both Metro FM and Radio 2000.

DJ Fresh recently got booted on Metro FM and has joined 947.

In this 2-hour long conversation the five dive into different topics around the radio industry, the current state of the industry, media, talent and their future plans.

Below we have rounded interesting takeaways from their conversation.

Talking on recession and reshuffling of Radio line-up

Tbo-Touch: SABC, decisions are made and nobody is held accountable.

DJ Fresh: “SABC aside, and I don’t know if it’s ‘A Black Radio’ thing where every March there’s this madness that we must reshuffle, we must hire new people, we must fire people but more often than not people are being fired not based on that we gave you deliverables , we gave you all the tools you needed , you didn’t deliver, therefore bye-bye. It’s almost like people wake up they decide I don’t like Gareth today he must go, my friend doesn’t like Sbu anymore, Sbu must go. Whereas if you say to me I gave you everything you needed to reach your targets, we paid you well – year on year you have not delivered or we’ve watched/tracked your progress for 3 years and we can see it’s not making business sense we gonna have to let you go THEN IT MAKES SENSE! Coz it’s a business decision.”

DJ Fresh touch based on how he keeps it 100 with his listeners and not the station. “In fact, the one thing I’ve probably appreciated the most about the past 8 weeks of madness is realizing how many loyal’s I have. People that started listening to me at YFM, that went to 5FM with me, that are saying if you go to Classic FM we are there because we are loyal to your brand of radio not to any radio station. ”

“I could broadcast from a cave, my people will find me. It doesn’t matter where in the world they are, so I don’t even do radio for whatever the market is coz I know that my people know where to find me.”

Gareth Cliff continued the conversation on DJ Fresh being booted at Metro FM “There are a lot of people talking about the reasons that you were fired and a lot of people think it’s this word… I think that is ridiculous. I think sometimes management need to find an excuse because they’ve made a decision .”

Cliff suggested that DJ Fresh was too expensive for SABC until Tbo-Touch had this to say:

“Fresh got fired-off SABC because he was too shinning,  he was too big than the management. When you work at Metro FM the management are the star and you’re their voice. So you’ll get a text a message about a live read that’s not on your script and you gotta execute it to their point or if it’s a brand and sometimes you’ll ask…but am I endorsing this brand?  they like no! it’s a stations mandate. When you start asking smart questions you are ready lodging to be fired.”

However DJ Fresh cleared-up this one by saying it was unfortunate that the situation became the storm that it did. He believes that this could have been nipped in the bud from week coz he was willing to play ball.

I wish we had more people with the security to know that they’d get another job. You’d actually have more people walking away from jobs. Lot of people sing for that dinner and they can’t afford to rock the boat because ‘what if I don’t get another means of income’. So there’s a lot of people who literally stay in shitty contracts because ‘I don’t want my kids to starve…I don’t wanna starve.‘

The Love for Radio

DJ Fresh: “The one thing that has me loving this platform is how I’m able to affect change and for me, if it’s not gonna change someone’s life I’m not touching it. I mean I always make sure that what I feel is my purpose on this planet. To lead decisions I make even in media.”

DJ Sbu: Similar reasons to DJ Fresh, “I modelled my career around purpose, and I think it something that is stuck with me in every decision that I make even in business now. It has to be inspired by purpose and radio was able to give me that immediate contact with people that I either wanted to help and at some point I didn’t even have a structure or a foundation or money in my pocket.”

Tbo-Touch: went back to the time when he got suspended and recalls a moment where he once gave one guy who was a cleaner at SABC some sort of radio moment that later changed their lives.  And concludes by thanking SABC for their role in his career. “SABC played a big role in my life, so I’ll always say it gave me that opportunity  to change those lives”

Robert Marawa: Extends his love and respect for Tbo-Touch “I met Touch for the very first time in New York, in the streets of New York because this is how this man was hustling”.  And rounds-off his take on mentioning how the big names like Bonang Matheba, as well as DJ Sbu, DJ Fresh, Tbo-Touch and himself,  got zapped at Metro FM at the peak of their careers.

The current state of Radio and changes

“One of the things I don’t like right now is the people who are just hired because they’ve got a good  Social Media presence. I don’t mean that they will not adapt and do well on air. ”

DJ Fresh: “When you’ve got actresses say to you I didn’t get a gig because someone with more Instagram followers got the gig, that’s sad! And it’s clear that she’s a bigger talent, she is a better actress, but simply because either she’s not active on social media or she doesn’t have a million followers, she doesn’t get the gig. That’s what in fact entertainment has become!”

Tbo-Touch: In support of DJ Fresh’s statement about social media, Touch recalls one of the conversations she had with American actress Regina King relating to social media numbers being used to weigh a talent.

And he also revealed that in March 2020 he will be bringing Regina King to South Africa.

Adapting to the new generation and knowing your audience

Gareth  Cliff directed the question to DJ Fresh as he has tapped into many platforms, Radio, and DJ’ing for young ones.

DJ Fresh: “You need to adapt all the time, I could do youth radio until I’m 100 because I know the market. If you know your audience you cannot not deliver to whomever you are speaking to. The minute you know who you are talking to, you can’t go wrong.”

Talking on relating to your audience…

DJ Sbu took us back to of his best radio moments in 2005 when Kabelo Thibedi held home affairs official hostage with a toy gun in an attempt to get his identity document (ID).

DJ Sbu: “One of the amazing radio moments I’ve had in my career was when a guy called Kabelo Thibedi walked into the Department of Home Affairs with a toy gun because he was gatvol.”

DJ Fresh remembers that moment very well… “I stayed in the car, I was late for a meeting because Sbu was on the radio with this kid”

DJ Sbu continued to tell the story “I was the negotiator, at the time we didn’t know the gun was a toy gun. I literally thought somebody is gonna die or somebody is gonna get shot. Radio played that moment where I had to play the negotiator, I’m not trained but I played that part so well that I calmed the situation down and then later on in the news on television we found out it was actually a toy gun. But that’s the importance of Radio, that’s how much it touches people and it’s immediate.”

What’s everybody is up to?

DJ Fresh on leaving Metro FM to 947: “Let me tell you what said to me you’ve made the right decision, when the CEO (Primedia) called me  2 days ago and said we’re not saying be offensive, but I want you to go to town, do what you believe radio should be in 2019!”

” That is the support you need to know you have as talent, that we trust you enough not to interfere in what you are doing. Why is it that when it’s working you wanna try and fix it?”

DJ Sbu on his Massiv Metro platform: “We are also consolidating it into a media company. I think having studied companies like Media24, Primedia and just where broadcasting and multimedia is going, we doing that with our platform. I think it’s gonna be one of the biggest in the continent over the next decade or so. ”

DJ Sbu closed-off his take by talking about ownership.

Tbo-Touch: on giving opportunities to graduates the THD24 Platform “I have incredible group of young people that come out of GFC (Gauteng Film Commission). GFC has been sitting with over 800 CV’s a year. These are qualified after graduates, guys who come out of great film institutions and they end up working in news desk of SABC or other companies, but you have a skill to shoot a Black Panther.”

“We need to find a way to create an incubation platform where these guys don’t end up being in the wrong places. ”

Robert Marawa: highlighted how Marawa TV was discovered during a trip to Egypt and found himself not being able just to watch a game like any other fan but the broadcaster in himself wanted to have a chat with some of the soccer players that were around.  And that’s how the demand for Marawa moments elevated to Marawa TV.

You can watch the full conversation below:

Nadia Nakai officially signs with Rebook
#YMZShots: Our Favourite 10 Shots of the Week