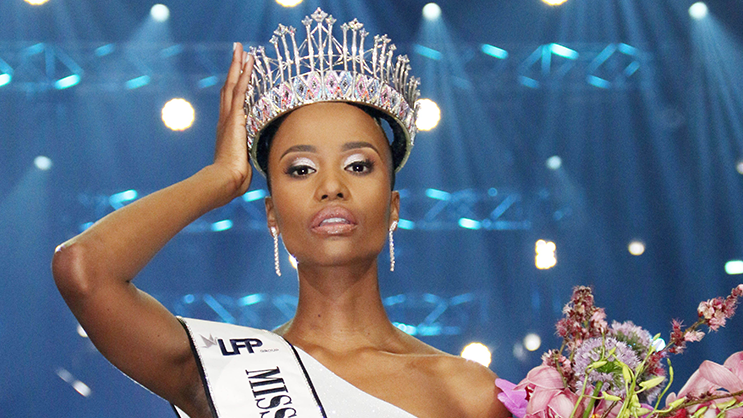 A dazzling Zozibini Tunzi has been crowned Miss South Africa 2019 as the iconic pageant proudly celebrated Women’s Day with a glittering and star-studded event at the Sun Arena, in Time Square, Pretoria.

The 25-year-old public relations graduate from Tsolo in the Eastern Cape, and now resident in Cape Town, will receive R1-million in cash as well as a further R2 million worth of sponsorships and prizes, including the use of a luxury Sandton apartment and a Mercedes-Benz cabriolet for a year.

Winner of the People’s Choice was Chuma Matsaluka, 21, from Nyanga in the Western Cape, who is in her third year of a humanities degree at UCT.

In her Miss South Africa acceptance speech, an emotional Tunzi said: “For as long as I can remember, I always knew that I had to do something extraordinary with my life. I knew that to live a fulfilling life I had to live a purposeful life; a life of service. I believe that every single person was brought into this world for a purpose and that we should never leave the world as we found it, we should always strive to make a positive change.

“At a young age I did not have a clear idea of how I would achieve this, but I knew I had to find a way to be impactful and to be a catalyst for positive change in my community and even the world. Finally, everything has come full circle as I find myself with the Miss South Africa crown, ready to deliver on the promises I have been making since I was child. I am inspired by the likes of Steve Biko, Nelson Mandela, Princess Diana and those of their calibre. They understood fully what it means to be selfless and to stand for something.

“I stand for the education of the South African youth, for equality and representation, as a Miss South Africa, I cannot wait to make a contribution to these important social causes.

“I came into this competition with my natural hair as a symbol of my firm belief in fair representation of any shape and form. And so, through my win, I hope I have inspired people, even if just one person to be themselves at all times and to never compromise their identities, and to insert themselves in spaces where they feel that people like them do not belong. Because the truth is, we do belong and in the words of the actress Lupita Nyong’o ‘Your dreams are valid’.”

The event, hosted by Bonang Matheba in front of an audience of thousands and broadcast live on M-Net and Mzansi Magic, was a spectacular affair with live music provided by some of the who’s who of the SA music industry including Sho Madjozi, Nasty C, Amanda Black and Jesse Clegg.