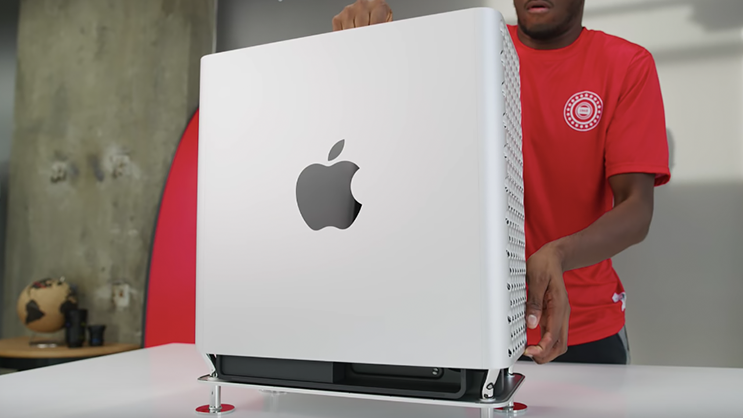 Back in June, Apple announced the new and most powerful Mac Pro and now we get a closer look at this mean machine.

The new Mac Pro is a real monster featuring a workstation-class Xeon processors up to 28 cores, a high-performance memory system with a massive 1.5TB capacity, eight PCIe expansion slots and powerful graphics card.

Mac Pro features powerful Xeon processors up to 28 cores, with 64 PCI Express lanes for tremendous performance and massive bandwidth. It also provides over 300W of power along with a state-of-the-art thermal architecture to allow the processor to run fully unconstrained all the time.

It features a six-channel memory architecture and 12 physical DIMM slots, allowing for a massive 1.5TB of memory.

Mac Pro comes packed with a powerful graphics card and up to 56 teraflops of graphics performance in a single system.

Now to get a closer look at this machine, Youtuber, Marques Brownlee aka MKBHD did an unboxing video with the machine to show few features, the design, and the performance.

Check out the Mac Pro unboxing and closer look below:

Here are Trevor Noah’s daily essentials including a Patek Philippe 5650G model
WHERE TO BUY: the Air Jordan 11 “Bred” this Saturday