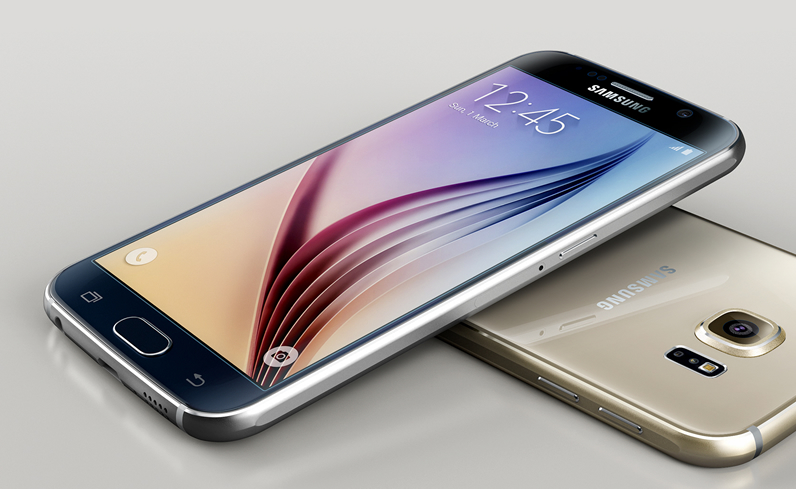 The wait is over. The Galaxy S6 is has been launched at MWC 2015 – and it looks really rather special. It’s joined by the Galaxy S6 Edge: a curved screen variant of the phone which won’t be sold in at that great a volume.

We know why you’re here though: you want to know everything there is to know about this new phone.

Sadly for Samsung, the design of the Galaxy S6 leaked out onto the internet before the big reveal – and they were completely accurate.
The phone is made of an attractive fusion of glass and metal, with the latter material the predominant choice. It’s more solid and premium feeling than the Sony Xperia Z range, for instance, as it’s more compact and fits in the hand better.
The size is actually pretty impressive, as it’s not much larger than an iPhone 6, yet fits in a much larger and higher resolution screen than Apple’s best.
It’s sadly not waterproof though – that’s going to be on the S6 Active, whenever that appears. The ruggedisation that didn’t work on the S5 has been ditched in favour of the improved design – it does mean the battery is no longer removable and the microSD slot is out of here.

Samsung has stuck stick with the excellent Super AMOLED displays we’ve seen from the company for quite a while on the Galaxy S6.

But this time things have become a lot more awesome: much like the Galaxy Note 4, the Galaxy S6 comes with a 2560 x 1440 pixel QHD resolution.
It’s a really clear and crisp display – although questions have to be asked over whether it will hurt the battery too much, especially as that power pack is actually a bit lower in capacity than in years gone by. Camera
Samsung has made the camera one of the key features on this new phone, and has stuck a 16MP sensor on there – but massively overhauled it from last year.

The Samsung Galaxy S6 Edge and S6 have identical snappers, with the South Korean brand looking to keep them as similar as possible – it’s just the screen that’s the differentiator.
Let’s get into the specs here: the rear camera has a 16MP sensor, with an aperture of f1.9 – this thing is going to be excellent for low light, and an improvement of 34% over the Galaxy S5.
It still has the same Auto HDR mode as before, and will show how the pic will look in HDR mode before you take it – plus smart Optical Image Stabilisation will keep the shake away.
The front facing camera has been upgraded too, with the same low light performance (which is a big jump from last year’s model – plus the ability to balance the white levels using infra red.

Battery
Here’s what’s worrying about the battery in the Samsung Galaxy S6; it’s only 2550mAh, compared to the 2800mAh of the phone from last year.
This means that either: Samsung was able to make the chipset, screen and operating system more efficient and could therefore get away with a smaller battery, or it realised that it HAD to make an amazingly designed phone, otherwise it would lose more ground in the high end smartphone game.

It seems worryingly like the latter might be true, but we’ll wait until review units roll around before passing judgement.
At least the phone will work wirelessly, and will all the standards as well, meaning if you see a charging panel without wires, you can plonk your S6 down on it without worry.
It can also charge up enough for 2 hours’ video playback in just 10 minutes thanks to the new faster charging system.

Samsung Galaxy S6 power
Android Lollipop is here for a variety of different handsets and it brings with it 64-bit support which we see on the Galaxy S6.
What’s interesting here is Samsung hasn’t opted for the Qualcomm Snapdragon 810 chipset, preferring its own engine – likely based on its Exynos technology although it’s not confirmed that just yet (although did tell us that it will be 64-bit enabled).

The decision to use 3GB inside is therefore a little bit maddening, as 4GB would have allowed the brand to fully exploit the 64-bit architecture. But given there aren’t that many apps or services out there which can make use of the extra power yet, perhaps it’s a bit redundant.
The Galaxy S6 does use new type of flash memory featuring in the handset called UFS (Universal Flash Storage) 2.0 to enhance data speeds and power consumption, as well as improve speed of use – which is why the microSD slot has been dropped.
To make up, Samsung will offer the Galaxy S6 in 32, 64 and 128GB variants, but extra memory fans will be saddened by the loss of expansion.

Samsung Galaxy S6 other features
There are a few things that we knew Samsung would include, and it’s done just that. the brand has been putting its fingerprint scanner on a number of phones and tablets so we’re not surprised to see in the S6 too.
However, it’s a touch-based variant, rather than the erratic swiping model, making it more in line with Apple’s Touch ID than the S5’s swipe-style reader.
The Galaxy S6 also keeps the heart rate monitor from the Galaxy S5, since that’s also been included on the Galaxy Alpha and Note 4, although it’s moved to the right of the camera sensor.
Mobile payment is well stocked on this phone, with Samsung allowing you to even use the phone to mimic a magnetic stripe from a credit card (how this will work, we don’t know… it’s not THAT thin).
With the ability to use NFC and QR codes for payment, think of it this way: if it’s not Apple Pay, Samsung will support it.

The Samsung Galaxy S4 and S5 both hit stores in April, of 2013 and 2014 respectively, so it’s probable you’ll be able to buy the Samsung Galaxy S6 from April 2015. Why so long? These higher-end devices likely need more manufacturing steps, so getting the volumes necessary to service the world will take more time.