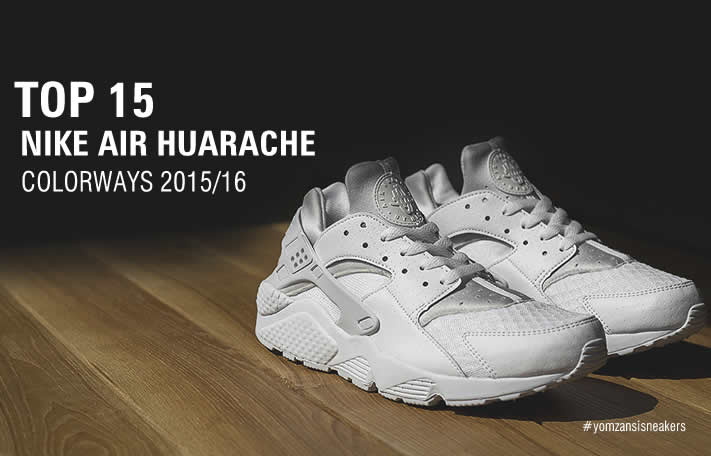 If you don’t own a pair of this silhouette “Nike Air Huarache” then we recommend you go to your local sneaker/s store and get yourself a pair to rock this year.

Nike Air Huarache “Treeline” is dressed in a Green suede upper with Light Bone accents that sits atop a White midsole and speckled outsole.

Nike Air Huarache “Triple Black” is dressed in an all-Black coating that includes a neoprene liner and supporting heel cage for stability. Other details include a textured midsole and a performance cushioning outsole for both casual and active wear.

Nike Air Huarache “Oregon Ducks “ features a Lucid Green, University Gold, and Wolf Grey color scheme, the shoe blends a Grey and White upper with both Green and Yellow accents that gives it that Ducks’ vibe.

Nike Air Huarache “Aloha”  features island vibes with the use of a beautiful floral print on the neoprene bootie.

Nike Air Huarache Run “Black/Gym Red” silhouette together with a black/gym red colorway is an instant winner, fusing some of the most popular sneaker design elements of the times all into one shoe.

Nike Air Huarache Run “Varsity Royal Blue-Wolf Grey” is dressed predominately in royal blue colourway with wolf grey/off-white hits. It features a suede construction and includes an eye catching upper in a combination of blue and wolf grey all throughout.

Nike Air Huarache “Black/Squadron Blue” features a Black and Squadron Blue color scheme that includes a neoprene build with the shoe’s traditional heel counter. The entire upper is done in Squadron Blue that overlays a Black base and sits atop a matching Black rubber outsole.

Nike Air Huarache “Dark Teal” is dressed in tonal grey base, accented with a cool selection of neoprene splashes ranging from Dark Teal to Fuchsia Flash while an off white midsole leads to a classic gum bottom.

Nike Air Huarache “Bred”  plays up a classic mix of black and red, sporting the former tone on the mesh toe, leather exoskeleton and that signature Huarache heel-counter, and the latter hue on the neoprene inner-bootie and outsole.