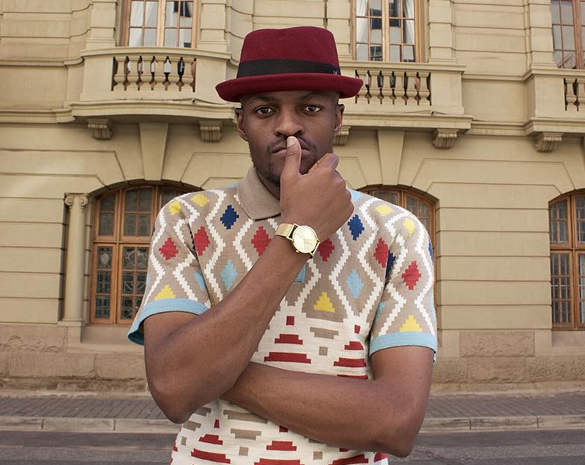 Nelson Makamo as an artist is a quiet story teller, Makoma is particularly talented at portraying childhood; the myriad numbers existing in the face of crazy social probabilities, who are able to keep moving and operating in such an existence in any case intrigue his work. He has an extraordinary capability of capturing the vibe of the urban world around us.

He started off his artistic career working with monotypes alongside DKW printer Jillian Ross in 2011. The technique lends itself to themes of memory and remembering. He works mainly with portraiture and titles allude to everyday experiences and fleeting moments. His monotypes make use of “ghost” printing, which is when a second print is made from the left-over ink from the first pull. The result is much more translucent and can be worked into more than before. Laduma Ngxokolo is one of Africa’s finest knitwear designer and innovator of the Xhosa (one of the South African dominant ethnic group) inspired knitwear brand MAXHOSA BY LADUMA.
Ngxokolo established the brand 2011 with a desire to explore knitwear design solutions that would be suitable for the amakrwala (Xhosa initiates) traditional dress. As a person who has undergone the ritual, he felt that he needed to develop a premium knitwear range that celebrates traditional Xhosa beadwork easthetics, using South African mohair and wool.
Since then, Ngxokolo has received numerous achievements and captures the hearts of many fashion lovers and media from South Africa, London, Paris, Amsterdam, Oslo, Berlin and New York. Ngxokolo recently won the 2015 Vogue Italia Scouting for Africa prize to showcase his collections at the Palazzo Morando Show in Milan, Italy. Apart from that, with his knowledge and love for sneakers he hosts an online show called ‘Hunting for Kicks’ which explores the sneaker culture and chat with sneaker collectors. Karabo Poppy Moletsane is Pretoria-based illustrator and designer who uses her creative work to tell the South African story. The series of her work brings together inspiration from local cultures, global influences and historical connection. She was selected as one of the seven winners of the “Are You With Us?” T-shirt design competition run by Woolworths and US musician Pharrell Williams. Recently she has been selected as one of the mentors who will go on to co-create Vodacom’s masterpiece artwork which will go on the Orlando Towers later this year. POLL: Which fast food restaurant have you been loyal to for years now?
AUDITIONS: ‘Rhythm City’ is looking for a new actress to join their cast