New Hip Hop releases you should be listening to right now! 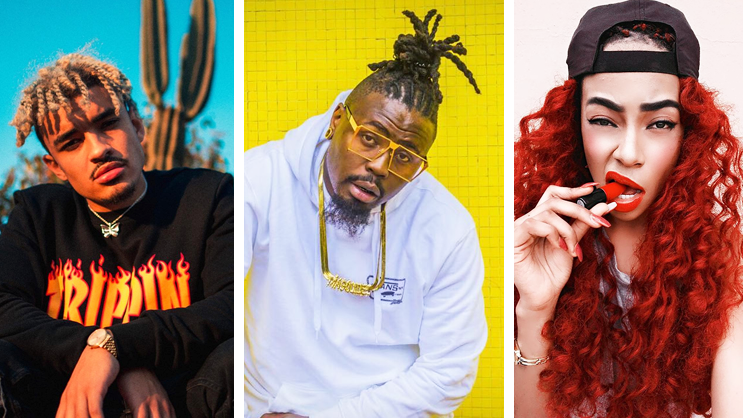 A number of Local Hip Hop acts have recently released new projects totally worth the listen.
We’re talking 6 projects that we’ve recently been bumping on our YMZ playlist. I mean damm that’s much music already in just a space of two months, and we’re still waiting for more deliveries from Emtee, Da L.E.S, Priddy Ugly, YoungstaCPT to mention a few.

Here are New Releases to check out too:

Maggz – For Love and Glory

After moving from label to label and year of much anticipation, fans finally get to hear Maggz solid project. Titled ‘For Love and Glory,’ the album is packed with 14-tracks and special features from Reason, Da L.E.S, L-Tido, DJ Maphorisa and more. This Maggz second delivery following 2009 release of The Breakout. ‘For Love and Glory’ is a combination of pure Hip Hop and rap all presenting club anthems, groovy and laid back jams.

Rouge the Rapper dropped her anticipated debut album titled ‘The New Era Sessions’ this past Friday. The project consists of 15 solid tracks including her lead singles; No Strings, Mbongo Zaka, Déjà Vu and Sheba Ngwan’O. Rouge breaks down the album into four subjects Old school, Trap, Love and Woman empowerment, all delivering a centric sound in trap, old school flavoured rap and club anthems. On this one, she decided to call on Big Star, Kly, Shasha and Moozlie as featured guests.

Rouge takes it further by acknowledging the importance of ProVerb, Prokid, Amu and Skwatta Kamp who set the solid foundations for local Hip Hop, from days of 90’s.

B3nchmarq presents their first-ever solid project ‘Aspen’ EP after years of much anticipation. The Pretoria cultured-duo have delivered a number successful single and latest collaboration ‘Wayase’ with’ Naija’s fines – Ice Prince. Aspen presents 8-tracks purely produced by Pretoria-based – IceMan Beatz. The boys kept the sound mellow, laid back and soulful adding some trap flavor. The big impact on the project is the delivery of the lyrical content, which is quite impressive. And this gives us a complete meaning to their sound which we can’t wait to hear on their upcoming debut album. They did mention on the Outro of this Ep that the album is 90% done.

Another interesting delivery is J Molley’s debut ‘Dreams Money Can Buy.’ Molley decided to put on only 9 tracks including Intro/Outro. And decided to take it easy on features by including Ricco and DJ pH. Molley presents a totally different ad uniqund on this EP. This is a mixture of mellow hip hop, hard beats and still kepping it soulful.

The gold standard of new school SA Hip Hop – Stilo Magolide released his debut titled ‘Tropicana Jiiigg’ this past Friday. This is his first studio album after delivering a successful mixtape ‘Camron Diaz’ in 2015 which kept everyone on their toes and yearning for a solid project.

Tropicana Jiiig is packed with 15-tracks including his lead single ‘Sefolosha.’ This album embodies Stilo’s personality, swagger and originality; it is heavy in beats and every song contains unique lyricism that is synonymous with slang from his BoyznBucks crew.