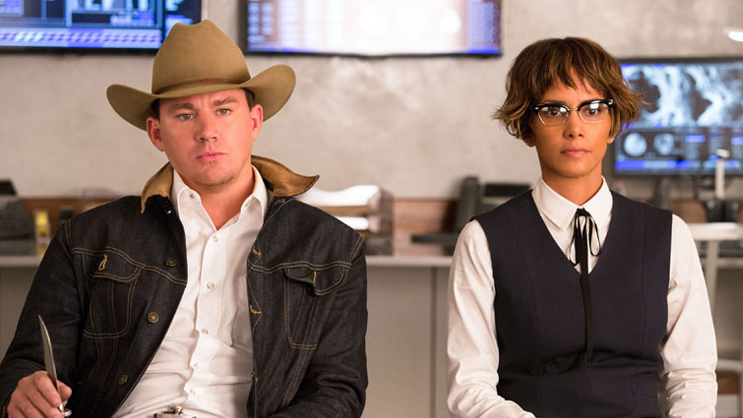 Storyline: Eggsy (Taron Egerton) is attacked by a former trainee who manages to steal the Kingsman agency’s secrets. Soon, missiles appear out of nowhere and destroy all their hideouts & Only Eggsy, who was dining with his girlfriend, Princess Tilde (Hanna Alstrom), and her parents, and Merlin (Mark Strong) survive, After the Kingsman headquarters is destroyed and the world is held hostage by Poppy (Julianne Moore), a notorious criminal mastermind and member of the secret new world order group “The Golden Circle”.

Eggsy (Taron Egerton) & Merlin (Mark Strong) set off on a journey that leads them to the discovery of an allied spy organization in the US called Statesman, dating back to the day they were both founded.

Eggsy, Merlin, and Roxy (Sophie Cookson),  learn that the evil Poppy, who controls all of the illegal drugs in the world, has set out to kill all her customers via a deadly virus injected in all her supplies. Symptoms begin with a blue rash. Poppy’s demand is the end of the war on drugs — and if the U.S. president complies, she’ll release the antidote to the virus.

In an adventure that tests their strength and wits, the elite secret agents from both sides of the pond band together to battle this ruthless enemy and save the day, something that’s becoming a bit of a habit for Eggsy.

In a plot twist: “Princess Tilde comes down with the blue rash, Eggsy knows he must save the world in order to save her.”

The Golden Circle is as cheeky, cartoonish, and crazy as its predecessor, but it’s also commendably unafraid to demolish what had come before it if it’s in service of the story. The new dynamic between Eggsy and his team is great, and the Statesman prove amusing counterparts to these gentlemen spies from across the pond, Eggsy saving the day, is always amusing, Dope Movie.