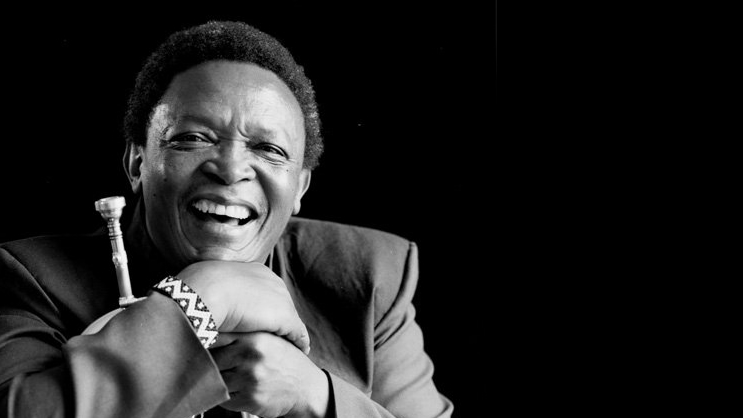 Legendary Jazz artist – Hugh Masekela has passed away after a long battle with prostate cancer.
Masekela was a well-known pioneer of jazz music in South Africa and the world abroad. His music will always be loved for carrying through our heritage to the world. Masekela has worked on endless music and film project in the past including the orchestra of the musical King Kong, he was featured in the documentary film Amandla (2003), In 2004, he released his autobiography, Still Grazing: The Musical Journey of Hugh Masekela. His music journey says it all. Bra Hugh was working on a collaboration with Riky Rick, and we’re not sure if it’s something that was completed or will even release.
This collaboration was part of a project for the 20th addition of the Standard Bank Joy of Jazz.

Here are some heartfelt messages from media personalities, artists:

@karynmaughan
“I think it is incumbent on all human beings to oppose injustice in every form.”
#RIPHughMasekela

@iamtbotouch
The last pulsating sound of a trumpet has transcended to the celestial #RIPHughMasekela thank you thank you thank Thank you. May the Lord strengthen the family, staff, friends and everyone that you ministered to!

@dineoranaka
You were pearls of wisdom and pockets of laughter! Thank you Bra Hugh ♥️♥️🕊🙏🏽 Heaven has gained a musical angel 🕊 #RIPHughMasekela I’d headwrap for you ANYDAY!

@RalfGUM
Deeply saddened to wake up to the news that Bra Hugh has passed on. I will forever be grateful for the possibility to have met and worked with this humble man and critical thinker. South Africa lost an icon.
#RIPHughMasekela

Here’s more about Hugh Masekela (Wikipedia)
Masekela was born in Kwa-Guqa Township, Witbank, South Africa. He began singing and playing piano at the age of 14, after seeing the film Young Man with a Horn (in which Kirk Douglas plays a character modelled on American jazz cornetist Bix Beiderbecke), Masekela took up playing the trumpet.

Following a Manhattan Brothers tour of South Africa in 1958, Masekela wound up in the orchestra of the musical King Kong, written by Todd Matshikiza. King Kong was South Africa’s first blockbuster theatrical success, touring the country for a sold-out year with Miriam Makeba and the Manhattan Brothers’ Nathan Mdledle in the lead. The musical later went to London’s West End for two years.

In 2003, he was featured in the documentary film Amandla! In 2004, he released his autobiography, Still Grazing: The Musical Journey of Hugh Masekela, co-authored with journalist D. Michael Cheers,[9] which thoughtfully detailed Masekela’s struggles against apartheid in his homeland, as well as his personal struggles with alcoholism from the late 1970s through to the 1990s.

In 2010, Masekela was featured, with his son Selema Masekela, in a series of videos on ESPN. The series, called Umlando – Through My Father’s Eyes, was aired in 10 parts during ESPN’s coverage of the FIFA World Cup in South Africa.

In 2016, at Emperors Palace, Johannesburg, Masekela and Abdullah Ibrahim performed together for the first time in 60 years, reuniting the Jazz Epistles in commemoration of the 40th anniversary of the historic 16 June 1976 youth demonstrations.