ALBUM OF THE WEEK: Sun-El Musician delivers a majestic & groovy debut ‘Africa to the World’ [REVIEW] 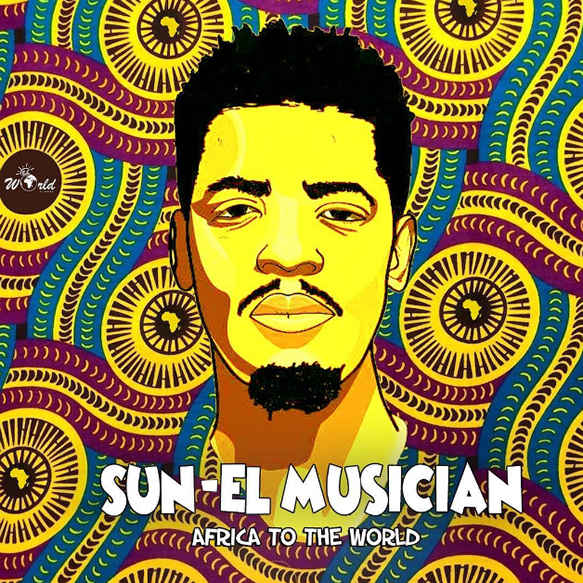 After dropping Akanamali last year, fans could not stop yearning for more of his work and with Africa to the World he delivers a majestic project.

The cover..
The cover of the album delivers a clean and simple look, with some artistic touch. The background is covered with purple, brown and blue illustrated patterns which represent that African feel and look. With a simple drawing, Sun-El’s face takes the centre of the cover with the yellow and black colours. The colours and simple design makes it way easy to recognize the album when it’s on a shelf.

Now into music…
He kicks off the playlist with a song titled With You which puts one in a groovy mood, exactly what the album is about, a great groove!.

Sun-El Musician impressed masses with the release of Akanamali in 2017. Featuring sweet brother love Samthing Soweto’s bluesy musings, it snuck up on, and shattered, dance charts with impeccable verve, in turn setting the tone for the deejay/producer’s debut long-player. Africa to the World does more than deliver four-to-the-floor bangers.

Sengimoja sets you on a journey with its heavy harmony and a perfect trumpet melody. The lyrics are easily presented with a mellow mood. The style of the song kind of takes you back to that house-kwaito style which was owned by Twistyle.

Random is already a popular dance-floor filler which indeed knocks the roof off with a mix of various elements, heavy guitar and the groovy beat.

On Life We Live , he collaborates with Les-Ego and Nontu X to present a slow and groovy jam. From the 5th track of the album, No Stopping Us the tone of the album goes uptempo carrying that vocal and groovy house music. Goodbye (feat DJ Charl, Lelo Kamau) and Umalukatane (feat. S-Tone) introduces us to the great production of Sun-El Musician when it comes to house sound.

Bamthathile which is currently on spotlight is another smash jam from this album. The song is slow on tempo but leaves you tapping that foot with the groovy beat. He wraps the playlist with Yere Faga which salutes honourable Malian singer Oumou Sangaré. Sun El-Musician has composed a standout epic—frankly, one of the only collections of songs you’ll want to spin with alarming frequency from the get-go.

Verdict…
This is exactly an album you play for a sensational journey of good music, strong with versatility, great lyrical work and a majestic production. The tone of the album is set between mellow and groovy, and with this well-orchestrated presentation, Sun-El Musician proves that he has a unique style and is creative when it comes to trying out different sounds and elements.

If you haven’t listened to the album, Stream below: