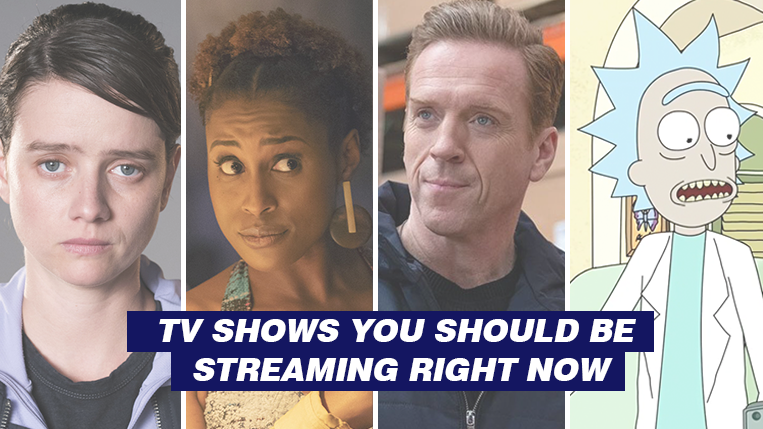 Time to refresh your watch-list!
Below we have put together a list of recent TV Shows that are worth watching.
The list below is some of the popular watches on our radar and trending list.

TV Shows you should be streaming right now:

Sure by now you’re familiar with Issa Rae’s hit -series ‘Insecure’ which is currently on Season 4. The new season is filled with Issa and Molly’s serious and often hilarious antics while navigating love, work and of course, sex.

When we last saw Issa and Molly, the pair were celebrating Issa’s 30th birthday, dealing with her new boyfriend ghosting her and wondering if Issa made a good decision when opting to leave her job.

Unlike the past three seasons which only had 8-episodes per, Season 4 brings a total of 10 episodes.

If you’re looking for some thriller watch, then watch ‘Into the Night.’

This is another solid release and Belgium’s first Netflix original; based on fiction novel The Old Axolotl by Jacek Dukaj.

The series follows a group of people who are hijacked while on board a red-eye flight from Brussels, heading west to escape from the sun (catastrophic solar) that kills all living organisms during daylight hours. So the group have to hop from one place to another looking for food and plane fuel and have to be on air most time until they find a place to be safe.

A bunch of wild scenarios occurs during this time while everyone is trying to survive and remain alive.

If you are a fan of Black-ish and follow-up spin-offs, Grown-ish and Mixed-ish, then #blackAF is must-watch for you.

The series is another delivery from Kenya Barris who also stars in the series. Loosely inspired by Barris’ irreverent, highly flawed, unbelievably honest approach to parenting, relationships, race, and culture, #blackAF flips the script on what we’ve come to expect a family comedy series to be.

#blackAF uncovers the messy, unfiltered and often hilarious world of what it means to be a “new money” black family trying to get it right in a modern world where “right” is no longer a fixed concept.

This is another local series that you should definitely check out. Blood & Water comes as Netflix’s second African original.

Blood & Water follows the exploits of the intelligent yet spontaneous 16-year-old, Puleng Khumalo played by Ama Qamata (My Perfect Family, Rhythm City), as she investigates the cold case of her abducted-at-birth older sister.

In the search, Puleng meets beautiful, alluring Fikile “Fiks’’ Bhele from a nearby private school, played by Khosi Ngema starring in her debut role. Thabang Molaba playing Karabo ‘KB’ Molapo, resident bad boy and high school heartthrob who is struggling to live up to his father’s high expectations.

In her on-going search, Puleng finds an ally and assistant investigator in Wade, played by Dillon Windvogel (Arendsvlei), while also having to handle the opinionated Wendy Dlamini, who at times is a bit too ‘woke’, played by Natasha Thahane (Skeem Saam, The Queen, Lockdown).

The adventure of the much-admired characters ‘Rick and Morty’ continues in Season 4. The half-hour animated series follows a sociopathic genius scientist who drags his inherently timid grandson on insanely dangerous adventures across the universe. Rick Sanchez is living with his daughter Beth’s family and constantly bringing her, his son-in-law Jerry, granddaughter Summer, and grandson Morty into intergalactic escapades.

Billions is another worth-watching series because of its solid storyline and cast. And if you have been following the rest of the Seasons then thumbs up. Currently, on Season 5, we still observe the ongoing rivalry between Chuck Rhodes (Paul Giamatti) and Bobby Axelrod (Damian Lewis).

Taylor Mason (Asia Kate Dillon) is forced back to Axe Capital, where Taylor must fight to protect their employees and their assets. Wendy Rhoades (Maggie Siff), Chuck’s wife and Axe’s performance coach, reevaluates her loyalties and forges surprising new alliances that put her at odds with both Chuck and Axe.

Originally premiered on SABC back in 2017, local drama series Tjovitjo has recently received much attention after being made available on Netflix.

With up to 13 episodes, the series stars Warren Masemola as the lead character. Other cast includes Lali Dangazela, Soso Rungqu, Rapulana Seiphemo, Harriet Manamela and more.

‘Tjovitjo’ is about the lives of a group of dancers, amatjovitjo trained in the classical dance style of Pantsula.

Another worthy-to-mention on this list is the local series ‘Intersexions’. Yes, this is a throwback series, but now it is available on Netflix and will receive much more audience.

To date Intersexions, still remains one the shows that are appropriate to the current time, as it explores how the inter-relationships between sexual partners enable HIV to spread insidiously across society.

Ozark is another must-watch drama, thriller series. In Season 3, The Byrdes are back in business and the stakes have never been higher. As tensions mount surrounding their new casino, The Missouri Belle, Marty and Wendy struggle to balance their family’s safety with the growing success of their money laundering empire.

In Season 2 we saw Ozark following Marty Bryde and his family as they navigate the murky waters of life within a dangerous drug cartel. With Del out, the crime syndicate sends their ruthless attorney Helen Pierce to town to shake things up just as The Byrdes are finally settling in. Marty and Wendy struggle to balance their family interests amid the escalating dangers presented by their partnerships with the power-hungry Snells, the cartel and their new deputy, Ruth Langmore, whose father Cade has been released from prison.

Hollywood is Netflix’s new limited series from Ryan Murphy and Ian Brennan, and follows a group of aspiring actors and filmmakers in post-World War II Hollywood as they try to make it in Tinseltown — no matter what the cost.