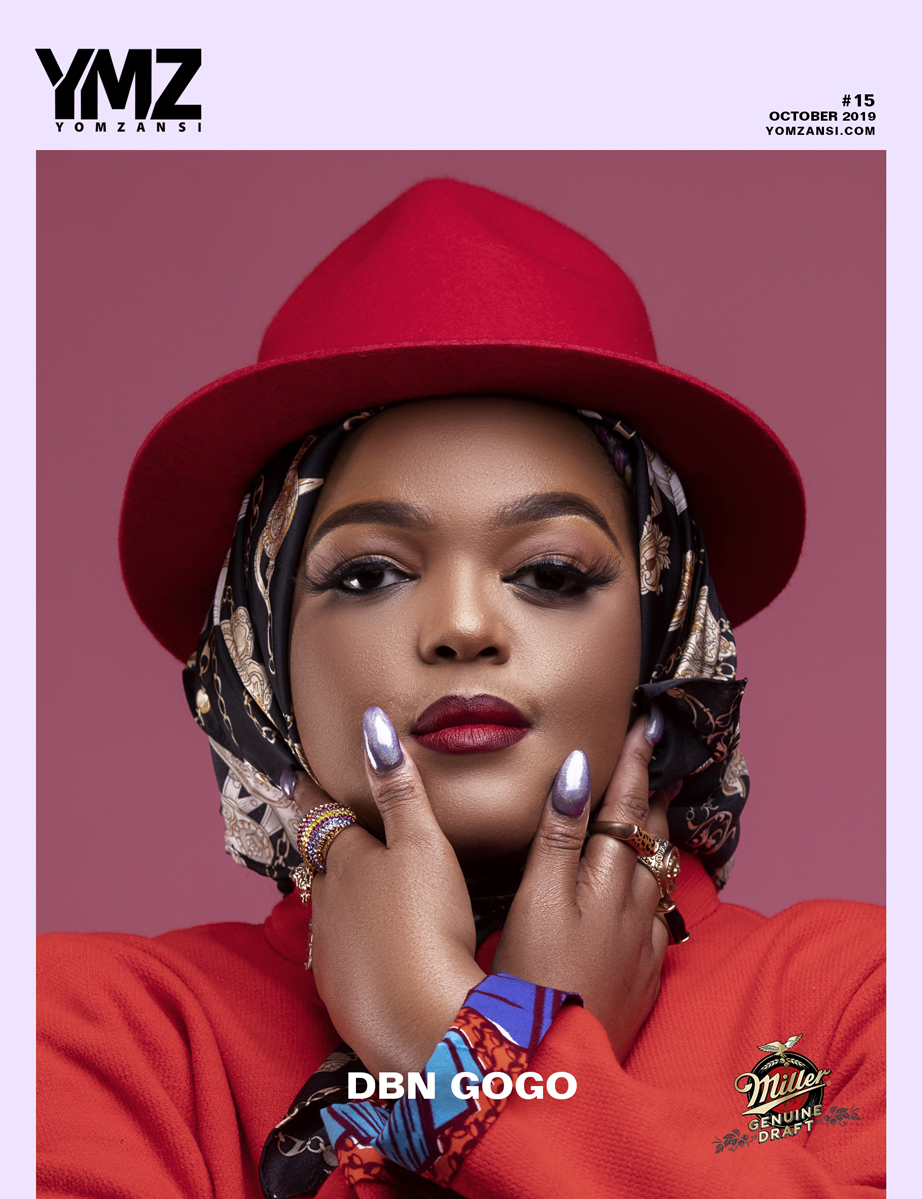 "I AM NOT INTIMIDATED BY BIG ACTS, WE ARE ALL HERE TO DELIVER TO THE PEOPLE. I’M HERE FOR THE PEOPLE, THAT’S WHAT I LOVE".

Mandisa Radebe, known to many and the music scene as DBN Gogo, is no stranger when you have to mention today's deejay club culture especially when it comes to dominating the female scene - and we can push the lid further and title her the HOTTEST FEMALE DJ at the moment.

Despite growing up in France, she credits her early days' musical influences back here home to legendary names like Miriam Makeba, Bongo Muffin, TKZee and falling for genres like Jazz and House Music.

Her Deejaying career rewinds back to Varsity days when she was residing in Pretoria - and she saw a gap in the groove scene. After putting her mind to it, she then began to build to her fame name all while baking her brand in the industry.

Today, DBN Gogo is a solid brand and has become a reputable DJ who is known for her ear-pleasing sets and vibe when she's on duty. Her sets can be described as commercial house music in simple definition, but she pushes the envelope further when it comes to Gqom genre and the current wave of Amapiano.

Even with the on-going conversation about how Amapiano took all the shine from the Gqom genre, DBN Gogo rubbishes this by referencing the international impression made by the likes of Sho Madjozi, Busiswa and DJ Lag, who are all recognized in other parts of the world for riding the Gqom wave consistently. 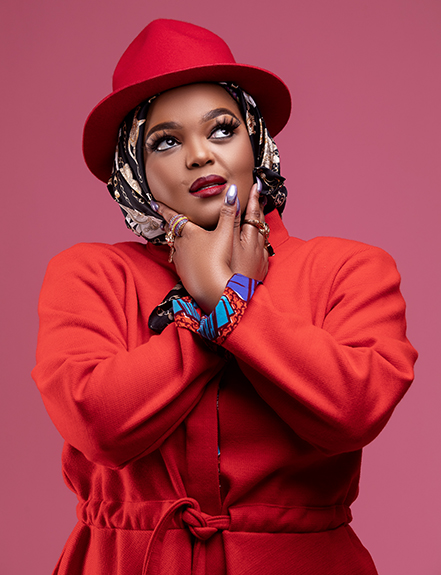 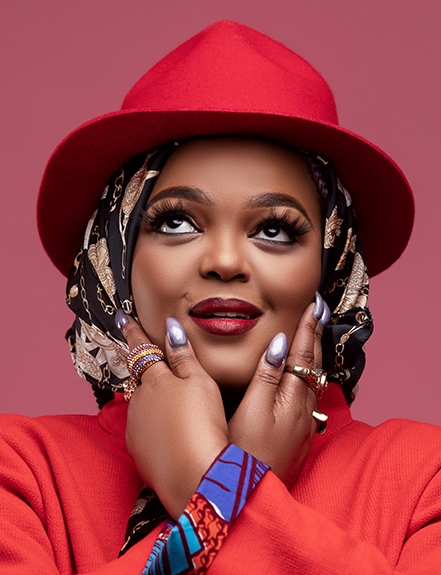 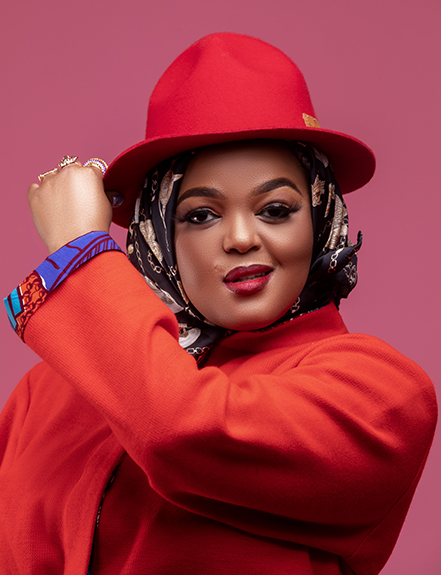 Her point comes heavy in this conversation because she is one of the jocks that fully contributed to the rise of both genres, and as it is currently. Having played at major cities in the country and for many crowds, she is upfront and knows the significance of not downplaying genres because of evolving trends.

DBN Gogo has headlined major shows like Ultra South Africa, RoseFest, Major League Gardens and Vodacom Durban July - and will be playing at the upcoming AfroPunk Joburg in December 2019, sharing a stage with the likes of Miguel, Solange Knowles and Masego.

With so much success and such an inspiring journey, we sat down with DBN Gogo for a conversation about; her deejaying career and breaking into the scene as a female, the challenges, her views about social media and staying relevant while staying consistent in such an ever-challenging industry.

Who is Mandisa Radebe and share some of your childhood memories?
DBN Gogo: Haha..Mandisa is my real name – she’s a quiet shy girl from KZN… I don’t know who she really is anymore.

I had a really wonderful childhood. Not easy but I never wanted or needed anything and didn’t get it. My parents worked for the government, so I was always by myself, my brother is 19 years older than me hence I was always by myself. I had a great childhood, I travelled the world, I stayed in the best places.

Where does your love for music come from?
DBN Gogo: When I lived in France – that was the beginning of the proper MTV era - the modern MTV age and that was simultaneously when Soul Candi was becoming a big thing – I had the best of both worlds.

And when South African artists were performing that side, they used to visit us so we had the likes of Miriam Makeba – Bongo Muffin. I’ve always grown up around music – Jazz - House, that’s where my love for music, especially House Music started. When we came down to South Africa during December time – the music was great, that's when TKZee Family was at their peak.

And during this time who influenced you?
DBN Gogo: I would say my mother influenced me, she always used to sing, she was never a person who told me what to listen to, we would just listen to anything. I used to sing a lot, I’ve slowed down on that. Just always being involved in music, being around music and being myself.

THEY THINK I’M FROM DURBAN ALL THE TIME. I GIG SO MUCH IN JOBURG… I AM ORIGINALLY FROM DURBAN, BUT MY NAME HAS NOTHING TO DO WITH ME BEING FROM THERE. 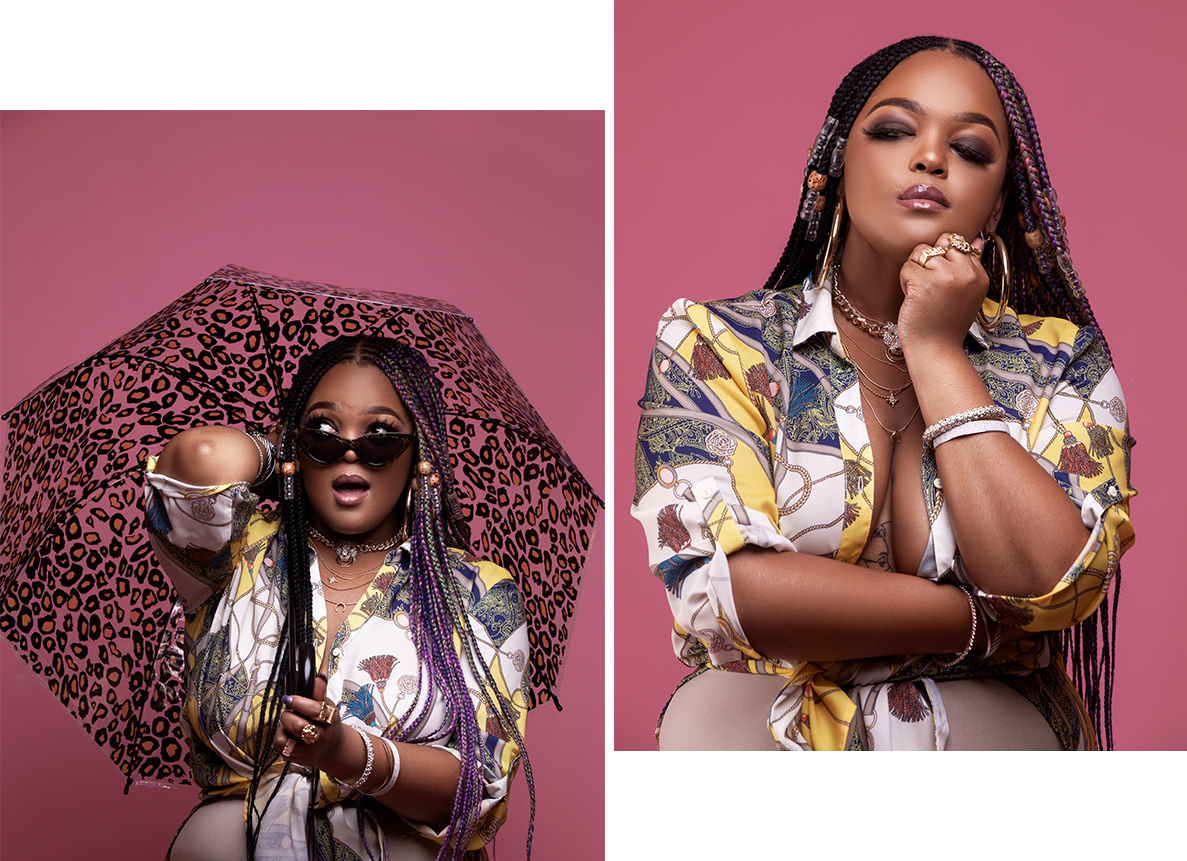 Where did it all begin for DNB Gogo?
DBN Gogo: When I was in varsity I used to party a lot and still do now... Thursday to Monday and obviously all my friends were Deejays so I was like okay, guest DJ’s come and they suck, I actually think I can do this better… that’s where it started, I just didn’t have anyone to teach me. I didn’t have anywhere to practice, anywhere to learn, it was a five year process until I learnt and eventually in 2017, DJ Venom was like "I play at Stones in Mellville, just come practice” and he would leave me and I would sit from 8 until 10 before the people came and I’d fiddle and figure things out. He showed me the basics – we had five proper lessons – then I played at Tshwanefontein for the first time and the rest is history.

The type of music you play? How do you describe your style of music?
DBN Gogo: I play House Music, any genre from Old School, Amapiano, Gqom. My set depends on the time I'm playing - and mostly on what the promoter would want me to play. So obviously at the moment, everything is Piano focused, but I play everything, if it's House and it’s good, I play it.

What challenges have you observed in the industry and would you change about that?
DBN Gogo: This industry looks down on women – we have to work five times harder. The industry doesn’t trust women and the money fights – having to prove yourself and your worth. My biggest struggles since I started.

Levelling the playing ground, considering talent above others. The industry is so overpopulated by people doing everything, the jack of all trades but mastering none. Eventually, people are going to complain and me as a DJ, I’m a service provider, coming to a party to make a cheque, if your patrons aren’t happy, then there is a problem. It's fine to be a pretty face, popular guy/girl but if you can’t do the job then why keep doing it? I feel like there is a lot of greed in our industry, people want to stay relevant.

It’s a wonderful and weird place, you get people with good intentions that give good advice, then you get everyone else that just wants to be like, ohh DBN Gogo she's hot and happening right now, how do you ‘separate the fake from the real. I’m always an open person, I’ll never judge people based on anything I have heard about them and that’s the problem I have been having… you know you trust people and you hear they are saying other things, but at the end of the day, the talent speaks for itself. 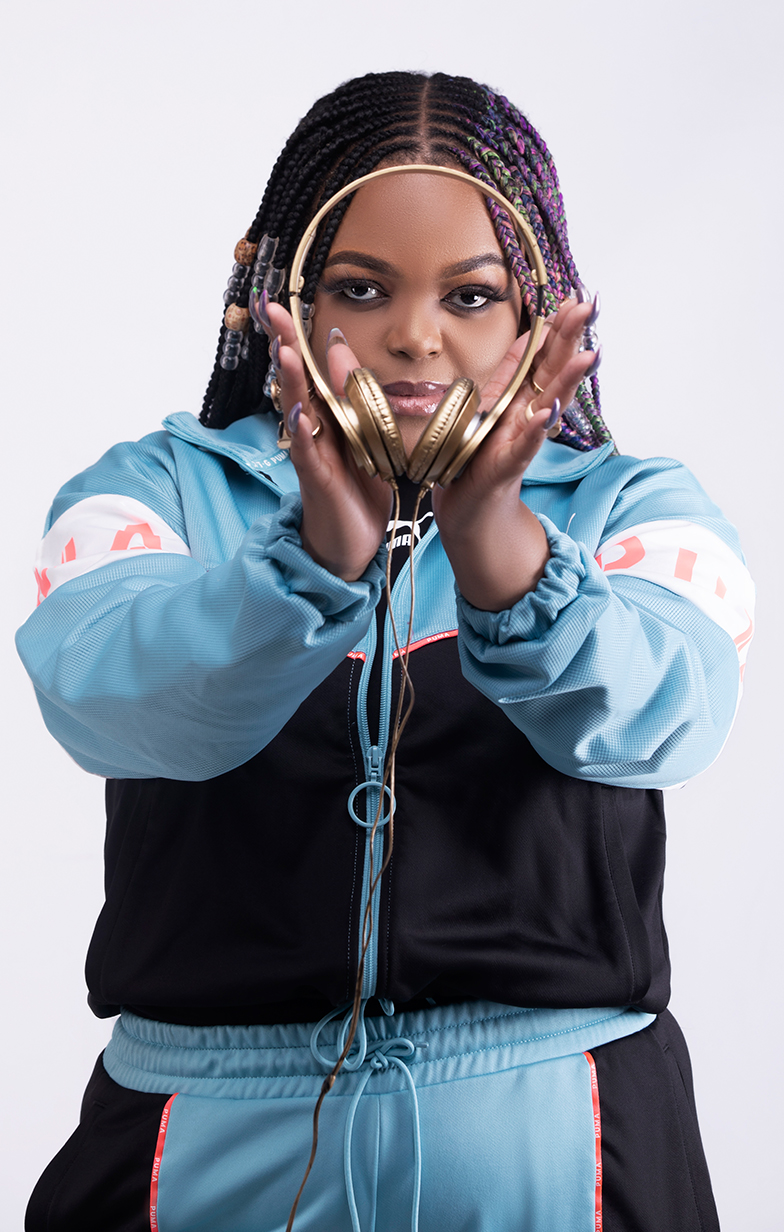 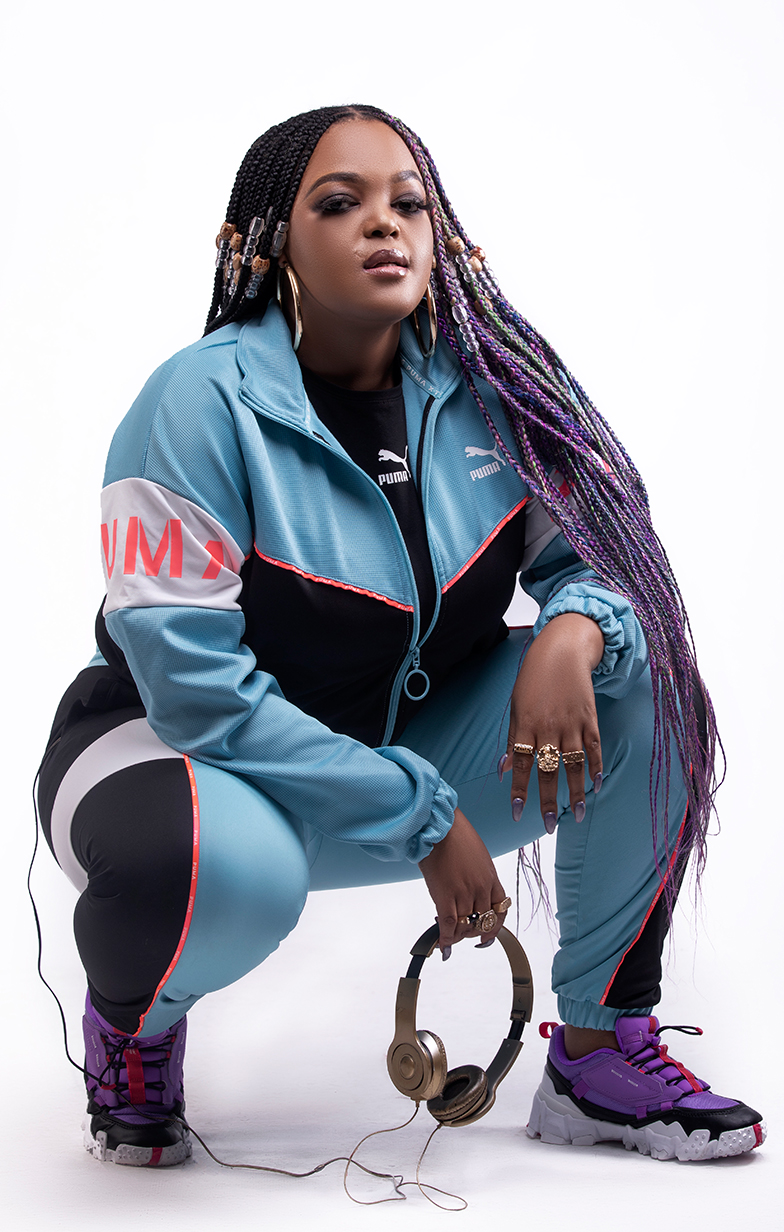 And the pressures in the industry?
DBN Gogo: I think people pretend a lot, especially in the industry, people are yearning for mutual and normal interaction. It's always fake Haha’s. I keep a very tight-knit of friends that understand what is happening in and around the industry but are also themselves. Even with me, I’m just myself, minding my own business. There are pressures from everywhere, a real-life example, in the past few months, I have lost weight and guys have so much to say and if I wasn’t confident about myself that kind of stuff would get to me. You have to be comfortable with yourself. You need to remember people aren't your friends, keep your circle tight with people who will protect you.

Is the Gqom vs Amapiano debate necessary?
DBN Gogo: I feel like the conversation is started by Joburg people...people need to look at the broader picture - if you look at stats, Gqom is still making more money than Amapiano. However, there is no reason why the two genres can't co-exist.

There is no such thing as Gqom is dead - if Gqom is dead Sho Madjozi and Busiswa wouldn’t be gigging, DJ lag wouldn’t be nominated for a Grammy. People are too concerned with what's happening in their immediate circle, there is space for everything. Music is wide, there are so many consumers.

What's your take on social media?
DBN Gogo: I try be as normal as possible, I still have to be careful as possible, but lucky for me, I haven’t been so censored, I’ve always been wild and out there. Social media is definitely a tool to raise awareness besides just general issues. I get it a lot when people ask how did you do it, how did you get here… besides hard work, I have a presence on the social streets and if anyone searches my name, my pictures and my views pop up.

What you put out to the world is important, you cannot dismiss social media. We just have to be responsible, but don’t make us role models for nothing, like I got a DM that read: “just remember you have little sister’s looking up to you"… I’m like little sisters??? I don’t, I don’t want to be looked up to and have to perform or act a certain way, I will always be exactly who I am… I don’t think I’m overly provocative or rude, I’m just myself.

Being part of the biggest Festival in South Africa how does that feel?
DBN Gogo: Its been a mind f**k, I enjoy getting a chance to showcase my talent. I’ve done all of this in 3 years when some people have taken many years to showcase their talent. I am not intimidated by big acts, we are all here to deliver to the people. I’m here for the people, that’s what I love.

You will be rocking at the upcoming AFROPUNK Joburg, how's that feeling?
Whoooo can’t have expectations in this industry. The vibe will be LIT, expect crazy hair, crazy outfits, maybe crazy guest performances. It’s time to start planning my set, its all in my head, I just need to execute… I plan sets according to the audience though, but you have to have a signature set.

Who are some of the women who inspire you?
DBN Gogo: Busiswa, Sho Madjozi. I think I enjoy genuine female energy, its something we need coz even when females collaborate it’s with men, so we women need to work together.

What would you tell a young lady who wants to be the next Durban Gogo?
DBN Gogo: Girl, you gotta be strong, you gotta practice, you have to know that this is what you want, you need to be willing to make the kind of sacrifices required and to do what it takes…be dedicated and passionate and sure.

And should we expect a music project from you anytime soon?
DBN Gogo: There's an EP coming soon, hopefully before the end of October, a few collabos with Jobe - Kamo – Killer.